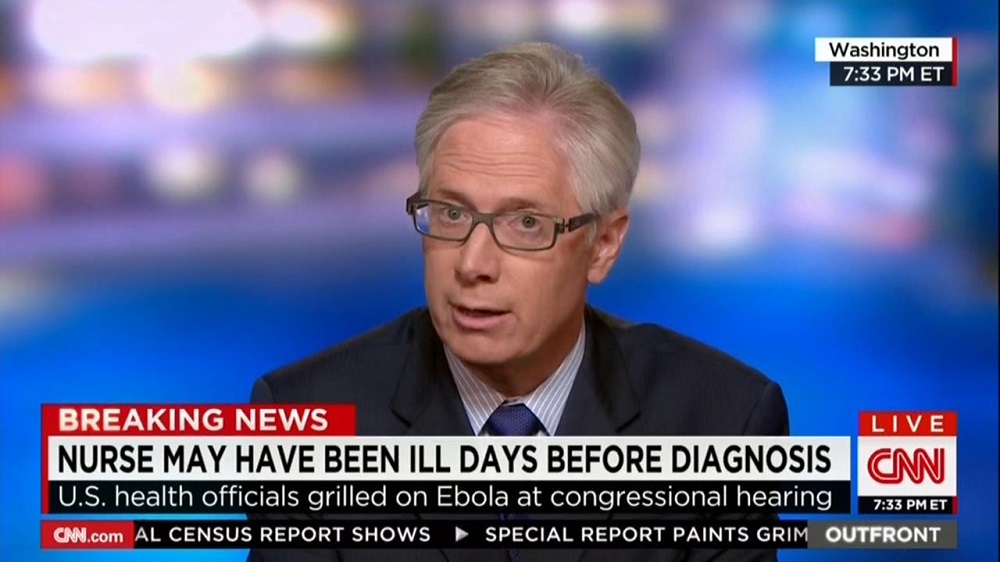 On Thursday's Erin Burnett OutFront, CNN's Tom Foreman zeroed in on representatives on "both sides of the aisle...[who] are also clearly frustrated by what they see as a lack of answers and accountability from the CDC." Foreman highlighted that "CDC Director Tom Frieden dodged even basic questions – like how did two hospital workers get the disease" at a congressional hearing on the federal government's response to Ebola entering the U.S.

The correspondent spent most of his report playing clips from the hearing, where Frieden was grilled on the controversial handling of the deadly virus: [video below]

ERIN BURNETT: Breaking news: the newest Ebola patient in the United States, Amber Vinson, may have had known – may have had symptoms that she was ill as early as Friday – meaning many more people may have been exposed to the virus than previously thought. But despite nearly three hours in the hot seat on Capitol Hill today, testifying before Congress, the head of the CDC made no mention of this information.

Tom Frieden may face many questions, but there weren't nearly as many answers. Tom Foreman is 'OutFront.'

TOM FOREMAN (voice-over): Amid raging questions over travel, school closings, hospitals, and the federal response to the Ebola outbreak, members of Congress expected answers from the CDC. What they got was this-

FOREMAN: Time and again, CDC Director Tom Frieden dodged even basic questions – like how did two hospital workers get the disease?

REP. JAN SCHAKOWSKY (D), ILLINOIS: I still don't feel like we have a good answer of why nurse one and nurse two contracted Ebola. Is it because there was a problem with not following the protocols, or is there something wrong with the protocols?

REP. BILL JOHNSON (R), OHIO: And I think what the American people are wanting is some assurance that somebody does know the details.

FRIEDEN: The investigation is ongoing. We've identified some possible causes-

JOHNSON: So, we don't know.

FOREMAN: Another question: why did the CDC tell the second nurse she could board a commercial plane, even with her temperature rising?

FRIEDEN: I have not reviewed exactly what was said. But she did contact our agency, and she did board the plane.

REP. DIANA DEGETTE (D), COLORADO: And she said she was told to board the plane.

FRIEDEN: That – that would be correct-

DEGETTE: Now, your August – now, your August 22 protocols say, people who are being monitored should not travel by commercial conveyances – don't they?

FRIEDEN: That expired. People who are in what's called controlled – controlled movement should not board commercial airlines.

FOREMAN: Frieden insisted months ago that virtually all hospitals were ready to take such cases, but asked now about equipment-

REP. MICHAEL BURGESS (R), TEXAS: Are you going to be able to quickly deliver a stockpile of personal – personal protective equipment like this?

FRIEDEN: Our goal has been to get hospitals ready. The specific type of personal protective equipment to be used is not simple, and there's no single right answer.

FOREMAN: On the idea of banning travel from West Africa....Frieden said that would make it harder to track infected people, who might try to come into the United States another way. But pressed on whether that was his medical opinion or a political talking point, he clammed up again.

REP. STEVE SCALISE (R), LOUISIANA: Have you had conversations with the White House about a travel ban?...That's a yes or no question.

FRIEDEN: We – we would certainly consider anything that will reduce risk to Americans.

FOREMAN (on-camera): Democrats and Republicans alike admit the Ebola problem is complicated. They say they don't want the public to panic. But on both sides of the aisle – and you could see it today – elected leaders are also clearly frustrated by what they see as a lack of answers and accountability from the CDC.