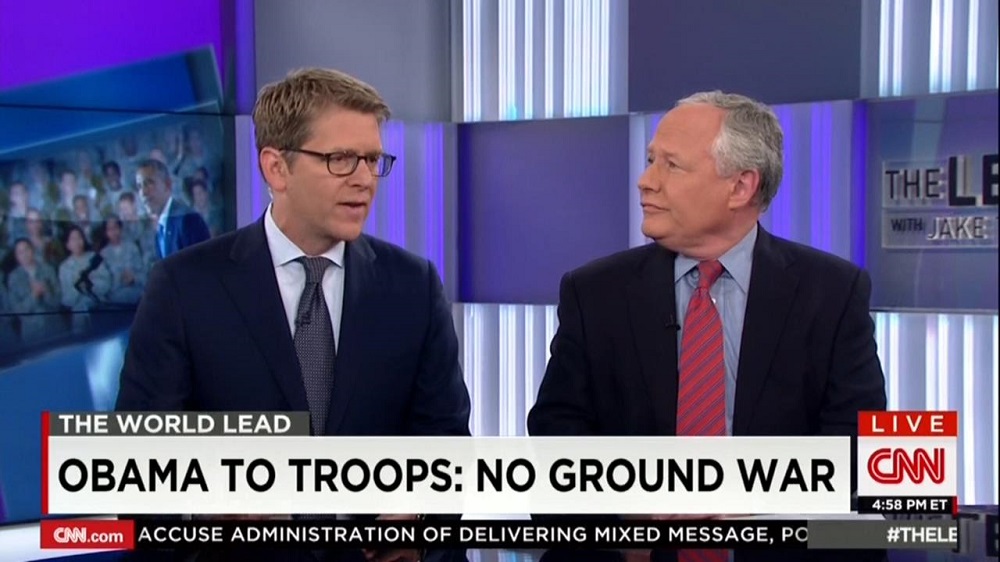 On Wednesday's The Lead, CNN's Jake Tapper tried to pull former White House Press Secretary Jay Carney out of acting like an apologist for President Obama. Tapper turned to his guest, who had just spent an entire segment defending his former boss's ISIS policy, and asked, "What is the difficulty in getting Arab allies to kick in with military assistance? Jay, you don't work for the White House anymore. You can be frank. What is the problem?"

Earlier, as Carney sparred with Bill Kristol of the Weekly Standard over the President's handling of the issue, the former Time journalist did his best impression of Chris Matthews and pointed the finger at former President George W. Bush for the ongoing situation in Iraq and Syria: [MP3 audio available here; video below]

JAY CARNEY, CNN POLITICAL COMMENTATOR: ...The distinction that is being drawn – and I think it is one worth drawing – is between what we did in Iraq – a war that lasted for a very long time; cost us an enormous amount of money; cost a lot of people their lives; and resulted in sustained – you know, terrible injuries for many, many more – and what we were doing now. And one of the reasons to make that decision is because that policy didn't work. It did not work, and it is one of the reasons why we are where we are today.

Tapper first turned to Carney and zeroed in on how "there are some mixed signals here and there between the Pentagon; between the secretary of state [Kerry]; between the White House." He continued by asking, "Is it a reflection of how quickly the mission is coming together? Is it a reflection of the President's obvious – and I don't fault him for it – but obvious ambivalence about using U.S. force? What do you see is the reason behind it?" The former Obama flack wasted little time before making a reference to the Iraq War:

CARNEY: I think you're right. The quickness of the policy development and the coalition-building contributes to that. I think you have, on the one hand, a president as commander-in-chief trying to explain to the American people what this fight is about – why we're using military force and put parameters around it – and distinguish it from the very long occupation of Iraq with substantial U.S. ground forces that America has already lived through. And I think you also have, on the other hand, professional military...who, fulfilling their responsibilities, are explaining what hypotheticals might look like. And among those hypotheticals is a situation where the current strategy which the chairman [of the Joint Chiefs] said he believes will work and believes in. If it doesn't, you could see a different scenario.

As a communicator in the White House, that's always a hard piece of business, right? Because now we're talking about mixed messages, instead of about substantive policy issues, and that always puts the White House a little on the defensive.

The CNN anchor then turned to Kristol, who blasted the President's longstanding resistance to putting a sizeable military force on the ground:

BILL KRISTOL, EDITOR, THE WEEKLY STANDARD: ...I think Marty Dempsey, the chairman of the Joint Chiefs; Bob Gates, former secretary of defense – are serious people, and they know that if you commit to a military mission, you do not rule out one of the key components of military power. The President is capable of saying – and if Jay were there, maybe he would tell the President – suggest to the President that he say it – you know what? We're not going to have 150,000 troops in Iraq. We are not going to be there for ten years. That's a long way from saying, no ground troops. Why does he say that? It is stupid. It is ridiculous. It's offensive-

Carney interrupted his counterpart to the defend the President, and the two which led to the former White House spokesman's thinly-veiled attack on former President Bush:

KRISTOL: Okay – no combat ground troops? Really? You can't imagine the fight against ISIS going in such a way, that we would say, you know what? This thing is on the cusp. We need to send in 3,000...or 5,000 U.S. combat ground troops to win this thing.

KRISTOL: No, it wouldn't. You would be saying – it would be leaving the option open, which is what a serious commander-in-chief does-

KRISTOL: There are already-

CARNEY: There is – the distinction that is being drawn – and I think it is one worth drawing – is between what we did in Iraq – a war that lasted for a very long time; cost us an enormous amount of money; cost a lot of people their lives; and resulted in sustained – you know, terrible injuries for many, many more – and what we were doing now. And one of the reasons to make that decision is because that policy didn't work. It did not work, and it is one of the reasons why we are where we are today.

KRISTOL: It's no reason for a president irresponsibly saying, we're not going to use troops in combat in Iraq, when the mission is crucial to the security of the United States-

CARNEY: I think the American people need to know what the President's purposes are; why he believes it's important to engage U.S. military power – but why, ultimately, this is a fight that has to be on the ground utilizing local-

KRISTOL: What Marty Dempsey was saying, in fact, is that if the Iraqis go in and need our help with advisers – with special operators – they may need U.S. troops in combat with them – and that's what the President has ruled out – that is what he's saying – no U.S. troops in combat, and that is, really – I can't remember an American president doing something so irresponsible, when's asking support-

Tapper ended the segment with his "frank" question to Carney, which led to his two guests taking parting shots at each other before the CNN host had to end the program:

JAKE TAPPER: We only have a minute left. I just want to get to one question, which is, what is the difficulty in getting Arab allies to kick in with military assistance? Jay, you don't work for the White House anymore – you can be frank. What is the problem?

CARNEY: The Middle East – Bill knows this as well – it's an enormously complicated place with – you have Saudi Arabia – you know, mindful of and worried about Iran. You have the Shia-Sunni conflict – you know, infecting everything and every decision-

TAPPER: But ISIS is coming for all of them!

CARNEY: Well, I understand that, and that's why it's so important that they step up. And I think if we do it all, they're less likely to step up.

KRISTOL: They have no confidence that this president will follow through; and therefore, they're not going commit.

CARNEY: Oh, that's ridiculous. So, for their own self-interest, they're not going to pursue a threat to their regime because of that, which is crazy-

It should be pointed out that Wolf Blitzer gave Carney the kid glove treatment back on the September 10, 2014 edition of CNN Tonight:

WOLF BLITZER (to Jay Carney): Make the case why the President decided to remove all U.S. troops from Iraq – not leave that residual force.