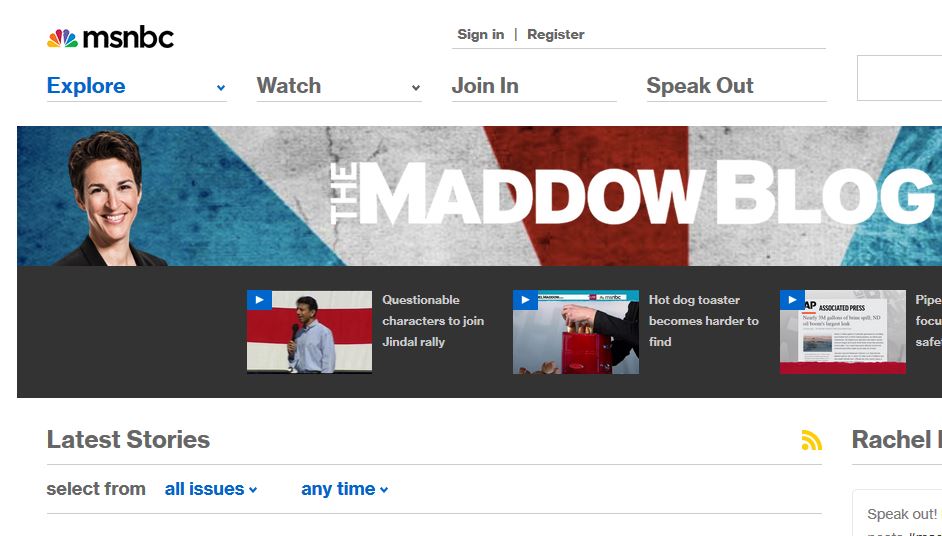 In a blog entitled "Huckabee eyes nullification plan in response to marriage ruling," Benen disparaged the governor for criticizing "the notion of judicial supremacy." Huckabee had the audacity to state, “Constitutionally, the courts cannot make a law. They can interpret one. And then the legislature has to create enabling legislation, and the executive has to sign it, and has to enforce it." Later Benen described Huckabee's accurate statement, that the "Supreme Court ruling has no force of law unless and until policymakers also choose to act" as "bizarre legal theory."

Clearly Benen believes that the Supreme Court holds credence now that it is deciding an issue like gay marriage, rather than issues such as mandating the provision of contraception or campaign finance.

Benen continued that Huckabee "sounds a bit crazy" when he explains how state legislatures could face "a confrontation" with the federal courts if the justices rule that refusing to recognize gay marriage is unconstitutional. According to the MSNBC.com contributor, Huckabee's comments bear a striking resemblance to those of Governor Orval Faubus of Arkansas in 1957, the politician who believed the state "could block the Little Rock School Board from adhering to the Supreme Court's ruling in Brown v. Board of Education."

Of course, Benen failed to mention that this governor was, in fact, a Democrat.

The blogger also made sure to display his disdain with Huckabee for daring to insult Beyoncé for her "lyrical content," and linked back to an earlier blog that cited the "strong racial component to Huckabee's unsolicited criticism" of the pop star.

Hats off to Rachel Maddow for employing bloggers such as Steve Benen, an MSNBC contributor who managed not only to completely miss the point, but also to make it about race.