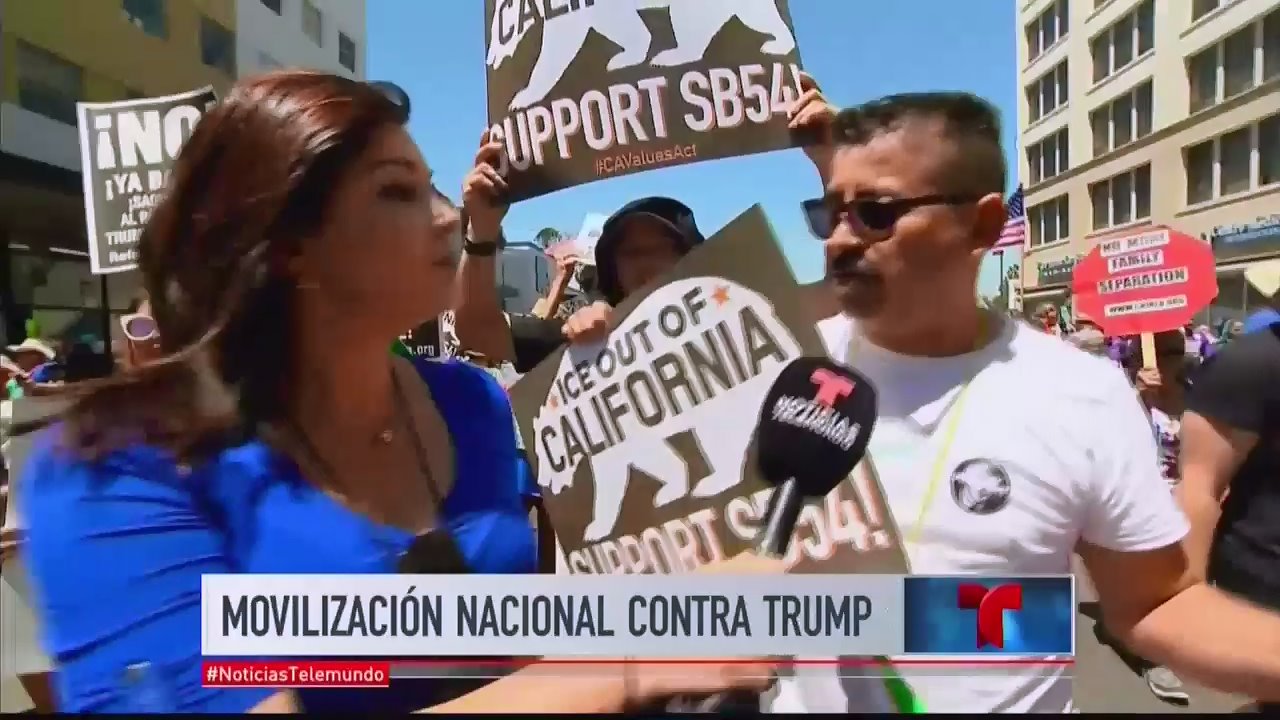 Kowtowing to the leftists who carry protest signs that demand “ICE Out of California”, Telemundo reporting of Immigration and Customs Enforcement (ICE) arrests has reached a new low.

The latest example is the network’s coverage of the arrest of a man unlawfully present in the country who ICE informed had illegally entered the United States more than a dozen times and who had also been previously been convicted of domestic violence. For more than two and a half minutes, the Telemundo report described how ICE agents broke into a home to arrest "a Hispanic Dad" in front of his seven children.

It was not until the last eight seconds of the report that the Spanish-language sister network to NBC even mentioned that the aforementioned "Hispanic family man" already had in his record "several" deportations and domestic violence charges.

PAULINA SODI, ANCHOR, TELEMUNDO:  Outrage grows among the immigrant community of San Diego, California. Agents forced the door of a house to arrest a Hispanic father in front of his seven children.

While ICE agents attempted to fulfill their duty and inform the family of Alberto Alonso that they would deliver their arrest warrant after completing the arrest, which they did, the family of the individual, along with residents of the area, deliberately hindered the process, further complicating matters.

To conclude the drama, Telemundo showed Alonso’s 11-year-old daughter Jocelyn tearfully saying that her father "did nothing wrong." This was in reference to a man that ICE reported was convicted of domestic violence in 2007 and had entered the United States illegally 16 times.

"Doing nothing wrong" would have been actually behaving as a respectful family man, complying with the law and entering the United States the right way: legally.

Below is the complete transcript of the above-referenced report, as aired on the May 9, 2018 edition of the morning program Un Nuevo Día, on Telemundo.

PAULINA SODI, NEWS ANCHOR, TELEMUNDO: An exclusive video from Telemundo San Diego shows the moment when agents burst into a home in National City, California. They arrested a Hispanic father and did this in front of their seven children. Heavily armed and yelling, the officers entered this house. The images were recorded by the 11-year-old daughter of this subject, as it is seen from inside the home, and by neighbors who gathered outside of the house.

REPORTER, TELEMUNDO: It was the last embrace from their father, since agents would enter through this door at any moment to arrest him.

BRIANNA ALONSO, WIFE OF ALBERTO ALONSO:  They started to threaten us, that we open the door, that they were going to break in. They turned off our lights.

REPORTER: They arrived around six in the morning asking for Alberto Alonso, assuring that they had an arrest warrant, but when they refused to present it, his wife immediately called the rapid response network.

BRIANNA ALONSO: Everyone told us not to answer, don´t open the door, but by the end, when it all happened, my husband said ‘You know what, they are coming in now alright’.

ICE AGENT: You are watching too much movies.

REPORTER: You are watching too much movies. That is how one of the agents answered, adding that they would give them the order once they finished.

UNIDENTIFIED ICE AGENT: We are going to enter.

REPORTER: All this, while others aimed at the door with their guns and they protected themselves with shields for three hours. Among the cries and screams of the children, they told them that there are minors inside.

BRIANNA ALONSO:  I was there, stopping them from entering, and after I left they caught him, they caught him and came in. They aimed their guns at me as if I were a criminal.

REPORTER:  Once they left, family members and area residents demanded that they reconnect the electricity, but also, that they respect the community. Activists complain about the way in which he was arrested.

PEDRO RIOS, AMERICAN FRIENDS SERVICE COMMITTEE: They did not present the arrest warrant until after the operation, and that is worrisome because it shows us that the agents are more aggressive in their operations.

REPORTER: ICE said that the agents had an arrest warrant and that part of the process is to identify the individual they are looking for and then make the necessary arrest. The neighbors’ intervention complicated the operation.

JOCELYN ALONSO, DAUGHTER: He didn’t do anything wrong.

REPORTER: One of his daughters says they were moments that will mark her forever.

JOCELYN ALONSO, DAUGHTER: He put food on our plates.

REPORTER: He put food on our plates, she says, and he did not deserve to be treated that way. According to ICE, Alberto Alonso, 32, had several deportations and charges of domestic violence.