Bilingual conservative publication El American was recently locked out of its Twitter account, and ordered to take down a series of tweets promoting a column that criticized former U.S. Representative Debbie Múcarsel-Powell for her comparison of the proposed Florida State Guard to Venezuela’s murderous colectivo goon squad.

The censorious tendencies of Múcarsel-Powell, who after her defeat in the 2020 election is now dedicated to the disarming of Americans, are a matter of record. Readers of this byline will recall that she directly instigated efforts by members of the Congressional Hispanic Caucus to tamper with the FCC licensing of an anti-communist AM talk-radio station in Miami. But it appears that her inclusion in El American’s “Idiot of the Week” section last week was just a bridge too far. The funny part is that this isn’t even a new feature. Previous El American Idiots of the Week include such luminaries as The Lincoln Project, Bloomberg, and Elizabeth Warren among others, and none of them tried to get El American thrown off social media.

Below are screengrabs of Twitter’s lockout messages to El American, with directions to remove four specific tweets: 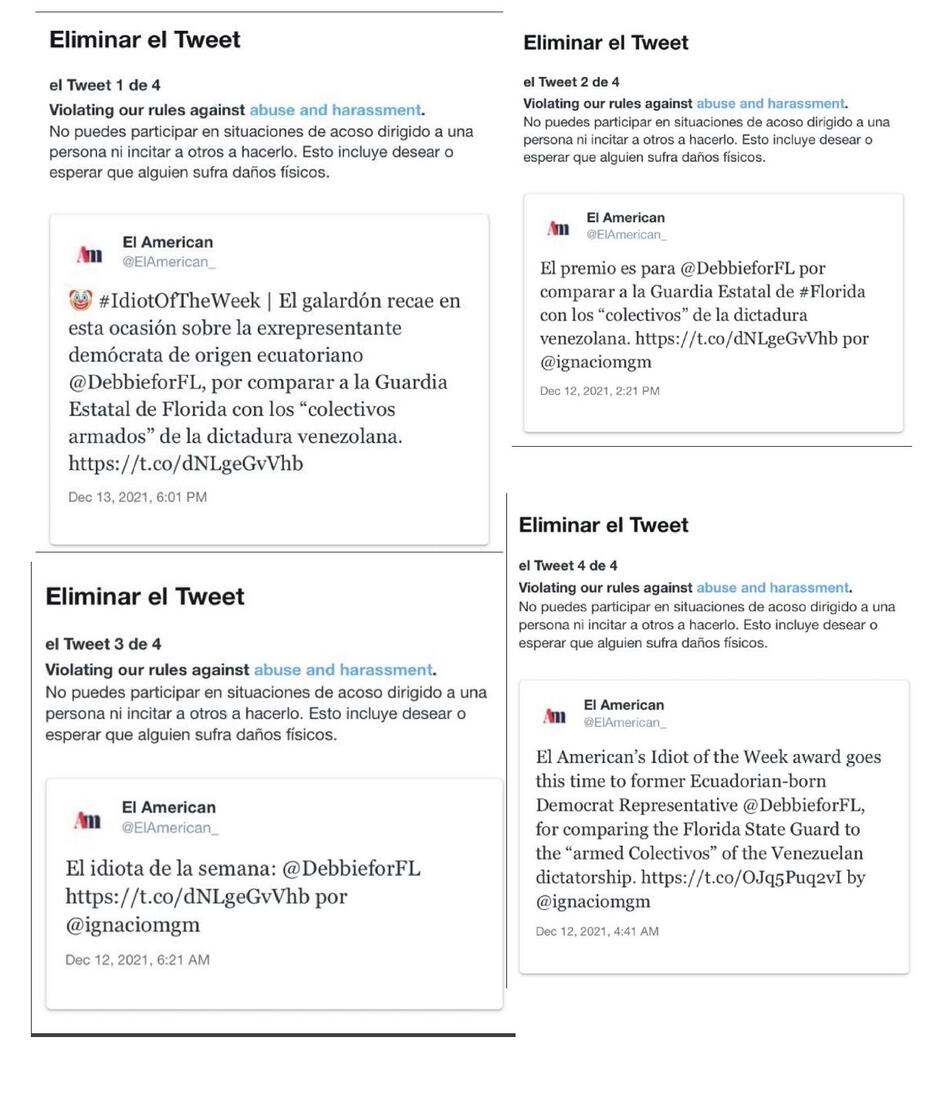 As we've seen recently, the mere existence of Spanish-language media is sufficient to trigger the left into all sorts of hyperventilating and overreaction.

In this case, legitimate criticism of a thin-skinned former congresswoman over her ill-considered comparison of the Florida State Guard, which El American has the absolute right to consider "idiotic", was sufficient to trigger an overwhelming and disproportionate response. It bears noting that conservatives routinely get called far worse than that, and Twitter doesn't bat an eye.

None of these tweets gained significant virality or traction on their own but will likely do so now- after Twitter's actions at the behest of a former congresswoman and allies who have taken it upon themselves to determine which speech is acceptable for broadcast to the Hispanic community.

The record will reflect that abuse of social media harassment guidelines in order to stifle legitimate criticism over policy differences is far more in line with chavismo than the establishment of a state volunteer corps.