The battle to frame recent election law initiatives has led to one of the worst instances of overt bias by commission in recent memory. As the nation’s leading Spanish-language networks sought to label election security laws in red states as “restrictive”, they virtually blacked out any coverage of House passage of the controversial H.R. 1. 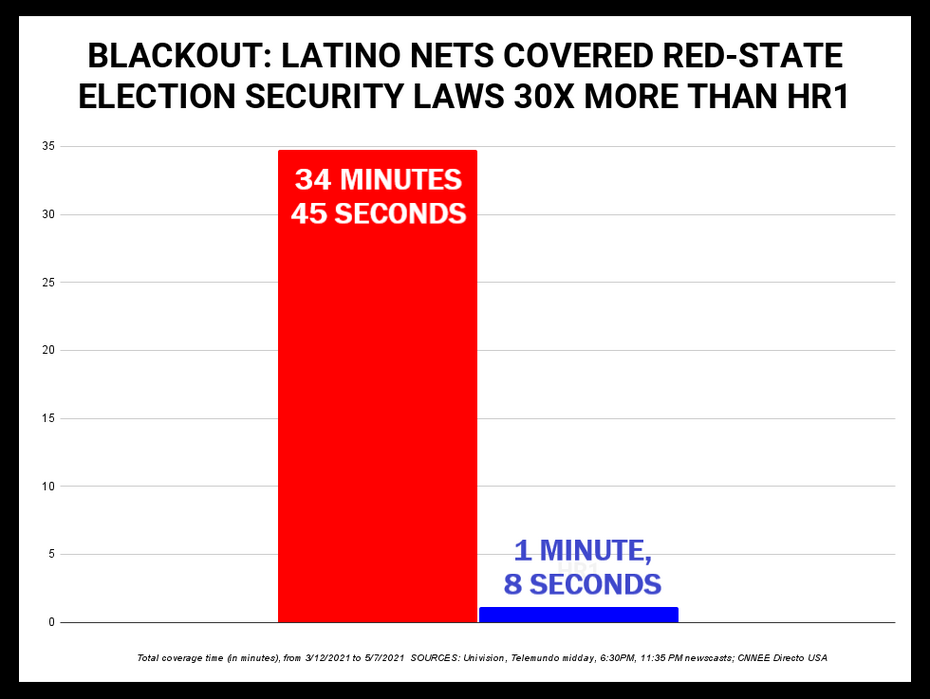 As the chart demonstrates, H.R. 1 garnered a combined total of one minute and eight seconds on Univision, Telemundo, and CNN en Español newscasts versus 34 minutes and 45 seconds of oppositional coverage to election reform initiatives in several red states, among them Florida, Georgia, and Texas.

Univision had sole ownership of the minute and eight seconds devoted to H.R. 1, and it should be noted that H.R. 1 was used as an opening and closing contrast to adverse reporting on Republican-led voting initiatives. As an example, consider these segments from Univision late night newscast, as aired on March 26th, 2021:

PATRICIA JANIOT, UNIVISION: The battle between Republicans and Democrats to guarantee that elections are transparent and without fraud continues, especially after House passage of HR1, which seeks to expand the right to vote. And as Pablo Gato reports from Washington, despite Democrats having majorities in both houses of Congress, this bill faces an uncertain destiny in the Senate.

PABLO GATO, UNIVISION: The House, with its Democratic majority, passed H.R. 1, and they claim that (the bill) ensures voting rights are expanded, not restricted. At stake: who gets to control cities, states, Congress, and the presidency itself.

The big question is whether Democrats have the votes to pass this bill in the Senate. It is unclear whether the more conservative Democrats in the Senate would support it.

This, plus another similar 15 seconds on March 26th, was the sum of H.R. 1 coverage on Univision. That is, opaque mentions of H.R. 1 as “expansive” without any additional detail and as contrast to “restrictive” red-state policies.

Interestingly enough, there is no explanation of HR1 or what is actually in the bill, but Gato did find the time to say that the bill was of paramount importance in terms of political control of the country.

As our previous reporting indicated, Univision has no problem listing their grievances with these statutes. However, their viewers have no idea as to the scope of the extent to which elections are federalized under the radical H.R. 1. Univision’s viewers are not informed, for example, of the complete obliteration of voter ID requirements, which Hispanics broadly support and are currently in place in every Hispanic country of origin. They’re simply expected to trust whatever anchors read off of the teleprompter.

And yet, Univision’s vague mentions of H.R. 1 far surpass Telemundo and CNN en Español’s total blackout of H.R. 1. Election security reforms are widely derided over the course of 34 minutes and 45 seconds, stuck with a “restrictive” label, yet not one word is devoted to a disclosure of H.R. 1. The imbalance is staggering. To put it plainly, the nation’s Spanish-language networks are keeping HR1, and its radical transformation of the American electoral system into something similar to what they likely left behind, hidden from their viewers.

If they’re serious, those allegedly seeking to curtail disinformation in Spanish-language media can start by taking a look at what happens at Univision, Telemundo, and CNN en Español, where viewers are clearly and demonstrably disinformed.