Univision shockingly airs another story that goes against its broader narratives: this time, by reporting on recently deported Mexican nationals that are quickly going on to find meaningful employment in their native land.

Here's one such happy returning deportee, as depicted on the network's principal evening news program, Noticiero Univision, on Monday, March 27:

Pedro Simon, deportee: Here I feel very happy, because it's my country and I feel at peace here. And more than anything, with a good job and the fields are beautiful.

The most surprising thing about this story is its departure from Univison's standard deportation coverage, which is mostly driven by fear and footage of sobbing children.

Perhaps most interestingly of all, the report concludes with correspondent Jessica Sermeño noting that in the Mexican state of Sonora alone, there are some 50,000 agricultural jobs currently available there for returning deportees.

One of the main points discussed south of the border when it comes to immigration is the issue of reintegration - specifically, Mexico's ability to absorb returning deportees into its collective infrastructure. Conventional wisdom says that Mexico has no ability to reabsorb, and that a significant number of returning deportees would overwhelm the country's civil institutions. In other words, when they're gone, they're gone.

But here are 50,000 available agricultural positions in Sonora, contrary to narrative and popular belief —  so it now seems beyond question that the neighboring country does in fact currently have a rather significant capacity to reabsorb a substantial number of its returning citizens.

Instead of fear and sobbing children, Univision viewers got to catch a glimpse of hope beyond the usual doomsday propaganda. The network deserves a measure of credit for reporting the truth against its own vested self-interest.

Below is a transcript of the full report as aired on the March 27, 2017 edition of Noticiero Univision. 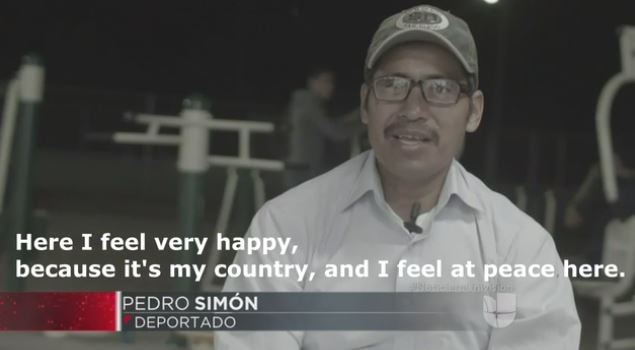 MARIA ELENA SALINAS, UNIVISION ANCHOR: Field owners in Mexico - in Sonora, Mexico, have discovered a great potential for fiend workers among deportees from the United States. They claim to have thousands of available well-paid jobs. Jessica Sermeño has the testimony of workers that have found the light at the end of the dark tunnel of deportation.

JESSICA SERMEÑO, UNIVISION CORRESPONDENT: Manuel Pérez and Pedro Simón have two things in common: They were born in Oaxaca, in southern Mexico, and have been recently deported.

MANUEL PEREZ, DEPORTEE: One morning, I went to wait for work where...where we would wait at an Albertson's and a Home Depot, and, well, the ICE raid went down there, and they grabbed me and dumped me to Mexico.

PEDRO SIMON, DEPORTEE: He was on the ballot that day, that was the day I was released. I'd crossed over like...22 times and they never caught me. Until that time, the last time- that I was caught in Reynosa.

JESSICA SERMEÑO, UNIVISION CORRESPONDENT: But despite the deportation, Manuel and Pedro are not sad. They already have work as laborers harvesting squash and eggplants at the San Luis Field, in Sonora, in the northern part of the country. It is a very special field. Although workers (there) do not earn the same (as what they would make) in the United States, they don't have to hide. Besides, they can study, play soccer, work out- all within the same facility that is property of Rico Farms.

FERNANDO TAPIA, OWNER, RICO FARMS: Besides investing in infrastructure and machinery and equipment, we are also care about investing in everything (pertaining to) quality of life for the people.

JESSICA SERMEÑO, UNIVISION CORRESPONDENT: Fernando Tapia owns the field. He tells Univision that he has realized that workers perform better when they are happy, and he assures that he has even more jobs to offer to deportees.

FERNANDO TAPIA, OWNER, RICO FARMS: To learn, to be able to graduate from school if you already didn't do so...to read, write...in fact there are soccer tournaments where people can win trophies...

JESSICA SERMEÑO, UNIVISION CORRESPONDENT: Manuel and Pedro feel fine in this particular place in Mexico. Now they don't want to return to the United States.

PEDRO SIMON, DEPORTEE: Here I feel very happy, because it's my country and I feel at peace here. And more than anything, with a good job and the fields are beautiful - it's beautiful, and there will be times when it's hot but this here place has air conditioning...the best.

JESSICA SERMEÑO, UNIVISION CORRESPONDENT: Sonoran authorities state that in their fields there exist another 50,000 positions that could go to deportees returning to this country. In Mexico City, Jessica Sermeño, Univision.