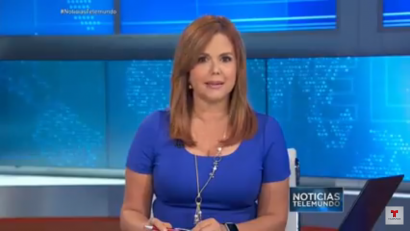 Telemundo anchor María Celeste Arrarás is back at it again, inventing words out of whole cloth so as to insert her opinion into a news story. This time, she dropped an editorial at the end of the network's coverage of a recent anti-Trump protest in California.

This isn't the first time thay the anchor inserts her biases into a story. Recall the time that she put words into Pope Francis' mouth in order to bash Hispanic conservatives on immigration, for example.

Here is her latest, in all its glory:

MARIA CELESTE ARRARAS, ANCHOR, TELEMUNDO: Many think that the comments from Trump to the effect of feeling like he was crossing the border to give his speech, passing under a fence, demonstrates his large ignorance of the odyssey passed by those who have to cross the border in search of a better life.

The obligatory question in this instance is: Why? The actual story was actually quite balanced, showing all aspects of the violent anti-Trump protests outside the California GOP convention. There was no reason to make up an editorial from whole cloth via the old, tired "some say" journalistic device - which is often used when members of the media want to add their biases and opinions into a story.

If anything, Arrarás was factually right in that whatever difficulties Trump faced in avoiding protests and arriving to a private event - even if walls and fences were scaled in the process - pales in comparison to what unauthorized immigrants endure when crossing the desert.

Would it not have been better, more legitimate, and more ethical to simply pose that question to an actual protester and run the footage? There is no abundance of camera-loving community agitators that would have loved to field that question on the record- and that would have been much better than to tack an improvised "some say" editorial to the back of the story.

It seems that Telemundo shares that sentiment, because the editorial comments were subsequently scrubbed from the network's digital and social media presence.