There is something to be said for the warm cocoon of academia, and its ability to draw out the true thoughts of radicals. Univision News President and Fusion CEO Isaac Lee's recent presentation at the University of Texas at Austin was certainly no exception.

Lee’s eye-popping remarks should serve as a timely reality check for conservatives looking at how to factor in Univision as part of their Hispanic outreach/inclusion strategies.  During a Q&A with NYU professor Jay Rosen, Lee was asked about Univision’s “theory of trust” as related to the network's impartiality and news coverage. Here is the crux of the Univision News President’s answer in all its glory.

“I think if you are an American journalist covering the Second World War, it’s not a problem for you to want the Nazis to lose. And I don’t think you need to be saying ‘Well, you know, the Allied Expeditionary Force Commander says this, and on the other hand the Fuhrer says that.’ I think it’s ok to understand that sometimes you have to be on the right side of the issues in history,” said Lee.

Strangely enough, I find that Lee's reductio ad Hitlerum of those who are ideologically opposed to Univision’s agenda is both horrifying and refreshingly honest. Conservatives should know exactly where they stand in terms of what coverage to expect on the issues - immigration and beyond - and should conduct themselves accordingly.

The Univision News President could not be more up front about the advocacy agenda he and the network’s star anchor, Jorge Ramos, drive.

“Univision’s audience knows that Jorge is representing them. That he is not asking the questions to be celebrated as a fair and balanced journalist. He’s asking the questions to represent them. He’s going to ask the person whatever is necessary to push the agenda for a more fair society, for a more inclusive society and for the Hispanic community to be better,” said Lee. 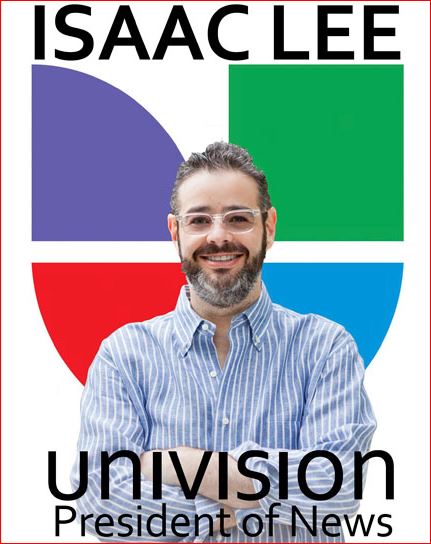 Lee virtually dispels the myth that Univision will somehow be welcoming to conservatives once immigration is off the table. He goes on to frame “Hispanic issues” with code words such as “well-educated” and "access to healthcare.” This means, given the network’s history, that opponents of Common Core, Obamacare, gun control, constraints on religious freedom, abortion, climate change legislation, etc. can expect to be framed as anti-Hispanic Nazis that must be destroyed in the name of “fairness” and “inclusion.”

I recall a conversation I once had with a (now former) Univision newsman regarding the network’s “Agenda Latina.” He paused after I asked him whether immigration was the network’s sole priority, and responded, “well, immigration is the first item.”

Lee’s framing of the progressive policy checklist under the “Hispanic Issues” banner should make it abundantly clear that Univision is not an honest gatekeeper to the U.S. Hispanic community, but is instead a partisan bridge troll.

Conservatives seeking to address the Hispanic community would do well to follow the examples of Congressman Steven Pearce (R-NM) and Senator Cory Gardner (R-CO) and make every effort to engage the community directly. Hispanics deserve to know there are competing visions as to what would actually advance their community (and America as a whole), as opposed to Univision’s good vs. evil distortions of the issues.

The network, whose executive chairman is a man who has pledged his “full might” to the mission of electing Hillary Clinton President of the United States, continues to show itself to be a pre-eminently partisan Democrat crony corporation. Like any other crony corporation, it appeals to those in power in order to receive regulatory relief. Here is star anchor Jorge Ramos, the network’s own General Patton, as he spells out exactly what that relief looks like.

“I think the future for the Spanish-language media is assured for decades. Simply for a very simple reason. In spite of the fact that a majority of the growth within the Hispanic community is coming from people being born here, we still have one to two million immigrants legally and illegally coming in every single year. Most of them speak Spanish. So therefore we have a market that is growing and growing,” said Ramos last week.