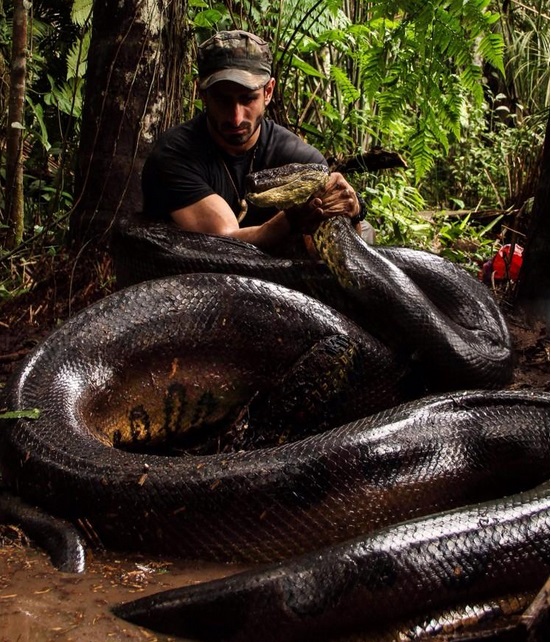 Earlier this week, Discovery Channel announced it would air a reality TV special December 7 called “Eaten Alive” in which filmmaker Paul Rosolie would let himself be swallowed by an anaconda, then make it out alive, without harm to him or the snake. Discovery Channel hoped the publicity stunt would boost slow Sunday night TV ratings.

Well, the ever-sensitive animal rights group PETA (“People For the Ethical Treatment of Animals”) doesn’t like that news one bit. PETA released a statement condemning the stunt and urging Discovery Channel to drop the special.

The group released this statement, according to People Magazine,

"This blatant publicity stunt sounds far-fetched, but if the description is accurate, the snake was tormented and suffered for the sake of ratings, as animals usually do when they're used for entertainment," PETA, which has yet to see the special, said in a statement. "Anacondas go days without eating and expend the energy needed to do so selectively. Making this snake use up energy by swallowing this fool and then possibly regurgitating him would have left the poor animal exhausted and deprived of the energy that he or she needs."

"Shame on this pseudo 'wildlife expert' for tormenting this animal, and shame on the Discovery Channel for giving him the incentive to do so.”

For PETA to condemn this publicity stunt is quite hilarious as PETA is no stranger to publicity stunts. In April, the group made news for bidding on serial killer Jeffrey Dahmer’s home, which was up for sale, in the aims of turning it into a vegan restaurant, claiming,

"We are always looking for ways to draw attention to the violence inherent in the production of meat, eggs, and milk...Dahmer's old house gives us a way to evoke sympathy for these victims and to suggest that a life-affirming diet can change everything."

In the past, they’ve had naked celebrities pose with animals for vulgar ads. President Ingrid E. Newkirk even protested by being tied up and forced-fed to protest the act of geese being raised for food.