On the Monday after the Oscars, MSNBC Morning Joe co-host Mika Brzezinski appeared on her colleague Ronan Farrow's canceled-but-still-broadcasting to promote her "Know Your Value" campaign to teach women how to be more effective negotiators in the marketplace for better pay and benefits. During her chat with Farrow, the issue of "pay inequality" in Hollywood was discussed, including the allegation that movie star Jennifer Lawrence was "underpaid" relative to her male co-stars in 2013's American Hustle.

Brzezinski ludicrously insisted that Lawrence should demand back pay from producers of the film:

BRZEZINSKI: Hollywood is the perfect example of just how bad this problem is.... The gap in what women are paid to their male counterparts, it's obscene.

I think everybody whose salary was revealed [by the Sony Pictures email hacking] like Jennifer Lawrence. They all should speak out. They all should hold companies accountable. I would look for retroactive pay for the movie where she was paid too little for. Because, honestly--

BRZEZINSKI: I'm serious! Absolutely! Because at this point, it's not going to be fixed unless you actually hold them to it.

Lawrence is a young actress, but she's hardly new to the ways of show business, and she most certainly has a cadre of attorneys and agents who pick over her movie contracts with a fine-tooth comb. It's ludicrous to present her as someone who was woefully underpaid and the victim of gender pay discrimination. 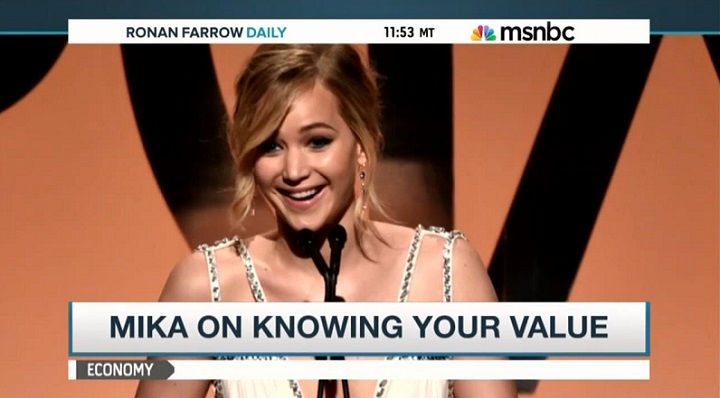 Indeed, in the entertainment industry it's very treacherous business to try to hash out what "pay equity" looks like when we're talking about paying actors and actresses who have different roles, different amounts of screen time, and varying "name-brand" cachet to rope in audiences at the box office. After all, Ms. Lawrence did share the screen with Bradley Cooper, Christian Bale, Jeremy Renner, and Amy Adams, all of whom have been in show business longer than Ms. Lawrence.

In fairness to Brzezinski, during her chat with Farrow, she did admit that "there are two sides" to the pay equity discussion and it's not as though corporate America is pure predatory evil.

"It's not, corporate, you know, companies are evil, women are the victims," Brzezinski noted, insisting that's why her "Know Your Value" tour is of tremendous value to the nation's working women.

All that said, the impression viewers were left with is that actresses like Ms. Lawrence are "victims," either of outright immoral and possibly illegal gender-pay discrimination, or of their own innate timidity and reticence to play hardball at the negotiating table.