"I think this guy has a lot more, a lot different motives than religion driving him. And he finally found a way, anyway, to express himself in his end as he died."

That was how Hardball host Chris Matthews closed a December 15 roundtable discussion segment about Sydney hostage-taker Man Haron Monis. Earlier in the segment, Matthews seemed perplexed as to why Americans would fear a similar incident happening on American soil, arguing that essentially such an incident would be no more or less rare than a school or workplace shooting motivated by non-religious factors. 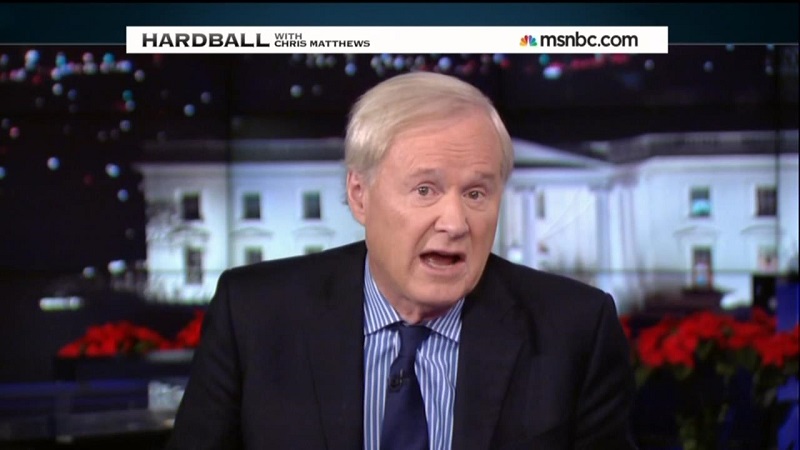 But essentially, how different is it that some other guy goes nuts and

starts shooting everybody?  Whether it's a kid in school or it's somebody that's upset with his job and comes back, like they did up here at the Navy Yard, the Marine Barracks. I mean, every time.

This is a difficult time to live. There's a lot of stress in our society. Marriages go bad. Jobs go bad. People's lives turn upside down and for the worse. And they get mad, and they get a gun and they start doing stuff. How is this connected, really, with the Islamic, Islamist problem we're facing in the world?

Surely Matthews cannot be unaware that, back in September, the FBI alerted local law enforcement in the United States that ISIS was issuing fatwas calling on Islamist nutbags in the United States who don't have the means to travel to fight in Syria to go ahead and wage jihad here at home. Reported Jana Winter of FoxNews.com:

A law enforcement bulletin obtained by FoxNews.com warned that Islamic State fighters have increased calls for "lone wolves" to attack U.S. soldiers in America in recent months, citing one tweet that called for jihadists to find service members' addresses online and then "show up and slaughter them."

There will be “a continued call - by Western fighters in Syria and terrorist organizations - for lone offender attacks against U.S. military facilities and personnel,” warned a July law enforcement intelligence bulletin from the Central Florida Intelligence Exchange, a state-run agency that gathers, assesses and shares threat information and works with the Department of Homeland Security. “These threats will most likely increase should the U.S. or its allies attack the Islamic State of Iraq and Sham (ISIS) in Syria or Iraq.”

In one example cited in the bulletin, a British jihadist encouraged radicals still living in the West to use Facebook and LinkedIn to find and target soldiers.

"You could literally search for soldiers, find their town, photos of them, look for address in Yellowbook or something," the tweet read. "Then show up and slaughter them.”