MSNBC contributor Michelle Bernard wasted no time on Thursday's edition of Hardball defending former White House volunteer Jonathan Dach -- now employed at the State Department in the Office on Global Women's Issues -- from charges that he patronized a prostitute while on official business as an Obama advance man in Cartagena, Colombia. 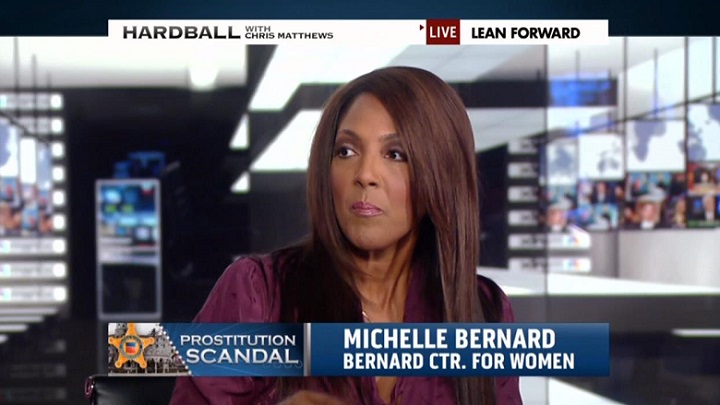 "I am clearly, you know, a victims' rights advocate. But the evidence here is not clear that this guy did anything wrong," Bernard, who holds a J.D. from Georgetown insisted, sympathizing for how he would not want to "testify, and lie about this and risk being disbarred over having a prostitute in his bedroom in a country where it's legal."

Besides, she added, Dach "wasn't on staff. He was a volunteer."

Host Chris Matthews helpfully chimed in that Dach "I don't think it was under oath" when Dach allegedly lied to officials who were looking into the matter. Panelist and Democratic Congresswoman Donna Edwards (Md.) sought to keep the focus on how "the White House needs to examine what it asks because they don't want people who work for them, when they call them on the carpet, to lie."

The sole Republican on the discussion panel, Liz Mair, was the one on the panel most concerned about the degradation of women resulting from such boorish behavior and the reported lackadaisical investigation thereof by the White House:

I get why this guy maybe didn't want to say what actually happened.... But that's not the point, the point here is, who is the person who is actually doing the hiring? Who is he volunteering for?  And if you're being dismissive about this kind of thing, I don't care if it's legal or not, that still doesn't make it right. And I think when you're the person who's standing up and saying hey, we're championing women's rights. That just look ridiculous if you put somebody like that in a position [unintelligible, cut off by cross-talk from Matthews, Bernard]

Earlier in the segment Mair offered a rebuke for President Obama for having characterized the Secret Service agents who patronized prostitutes as "knuckleheads," noting that such cavalier language diminishes the serious exploitation of women that happens in the sex trade:

LIZ MAIR, former RNC spokeswoman: I'm saying this purely with my woman hat on here, not with anything partisan going on but, you know, come on, first of all, calling them knuckleheads I think really diminishes this. When we're talking about people who work as sex workers, those tend to be some of the most exploited and vulnerable and abused people in all societies, even places where it's legal. Knuckleheads is really kind of playing it low. And frankly--

MAIR: Yeah! I think it's very dismissive, when actually that's a serious issue.