But although the law was approved by the people's elected representatives and signed by their governor, Roth treated the development as an affront by unelected Republican judges to the voters of the state (emphasis mine):

Whether to allow Wisconsin’s strict voter ID law for this fall’s election is up to the Supreme Court – a decision that could come any day. But on Monday, an appeals court gave the law’s backers a big lift.

A three-judge panel of the 7th Circuit issued a ruling upholding the law. It was the same panel of all-Republican appointees that last month removed a district court judge’s injunction on the law, leading voting rights groups to ask the Supreme Court to intervene. 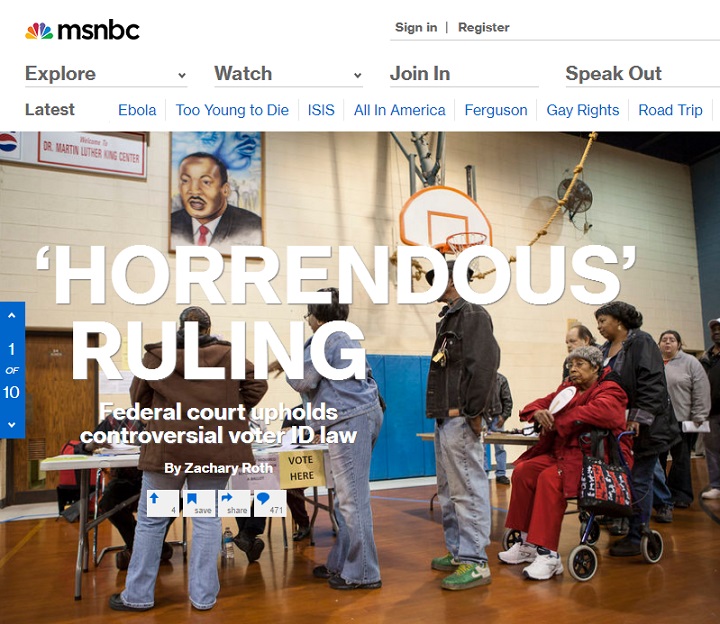 The 23-page ruling, written by Judge Frank Easterbrook, finds that the law is constitutional and does not violate the Voting Rights Act’s (VRA) ban on racial discrimination. The opinion is striking for its blithe tone in upholding a law that could disenfranchise many thousands. One prominent election law scholar called it “horrendous.”

Still, the ruling could give the Supreme Court an additional reason to keep the ID measure in place. Courts tend to be less willing to overturn a full ruling on the merits than a more quickly issued order, which is all that the appeals panel had previously offered. And since Wisconsin has until 5 p.m. Tuesday to make its case to the Supreme Court, the ruling could also give state lawyers some helpful tips for making its case.

You'll notice the partisan affiliation of the federal judges is noted, but that of the district court judge and the unnamed "prominent election law scholar" who deemed the law "horrendous" is [not-so] curiously omitted.

Roth did proceed to offer a nightmare scenario where a few hundred folks who sent in absentee ballots might not have their votes counted:

The law has likely disenfranchised voters already. When the appeals panel abruptly put the law into effect last month after it had been blocked for over two years, hundreds of people had already returned absentee ballots without ID, since the ID requirement wasn’t in effect at the time they voted. Unless the Supreme Court intervenes, they’ll now need to return to their local election office with acceptable ID to make their ballots count. Voting rights advocates say over 300,000 registered Wisconsin voters lack ID.

That's a fair complaint, but it seems highly unlikely that no state or federal judge would not intervene in such a case to require those absentee ballots to be counted in this election cycle, given how this matter was up in the air at the time of early absentee balloting.

But wait, there's more. This being MSNBC.com, Roth had to find a way to shuffle the race card into the deck:

Just as worryingly, a few days before the appeals panel ruled last month, Wisconsin created a new procedure for voters who lack ID and a birth certificate. But it only works for those born in the state. Those born out of state – who are more likely to be black or Latino – have little recourse.

That's an odd claim which Roth failed to justify by citing any statistical data. What's more, regardless of color, the law would apply to all persons born out-of-state equally. Simply because it may have a disproportionate impact among certain demographic groups does not prove the law is racially discriminatory. While Roth did cite Judge Frank Easterbrook making such a point, he quickly turned to an election law professor to trash the ruling as "heartless" and based on "superficial" reasoning:

At the heart of Easterbrook’s opinion is the claim that it doesn’t matter that minorities are much less likely than whites to have ID, because everyone has the same opportunity to obtain one. Since people can “scrounge up a birth certificate” in order to get ID, Easterbrook writes, anyone who lacks one “was unwilling to invest the necessary time.”

Rick Hasen, a professor of election law at the University of California, Irvine, called that “the narrowest test yet [that] I’ve seen” for deciding when a voting restriction violates the VRA. If the Supreme Court approved that approach, it would render the landmark civil rights law all but useless for stopping anything but the most blatant and explicit racial bias in voting restrictions.

Hasen called the ruling “heartless and dismissive,” “horrendous,” and “the shortest and most superficial discussion I’ve seen.”

Hasen is far from a knee-jerk critic of rulings that curtail voting rights. He praised a recent ruling by a federal judge in North Carolina upholding that state’s restrictive voting law, calling it “careful, well-written and well-reasoned.”

Easterbrook’s ruling also contains at least one crucial factual error. Repeating a common argument used by ID supporters, the judge notes that a photo ID is needed to board an airplane. As plaintiffs challenging ID laws have pointed out, that’s untrue.

Easterbrook even dismissed a study by two expert scholars, Stephen Ansolabehere and Nathaniel Persily, finding that voter ID laws do little to promote public confidence, because the study appeared in the Harvard Law Review, not a “refereed scholarly journal.” Ansolabehere is among the leading experts on voting and public opinion. And Persily was chosen as executive director of the much-praised bipartisan commission on election reform created last year by President Obama.

It is fair to note Easterbrook's factual error regarding commercial airline travel, but it is worth noting that to fly on commercial aircraft without a valid government-issue ID is an incredible hassle and may require a third-party or two to vouch for you. Here's an account from 2012 by New York Times blogger Ann Carrns about all the hoops she had to jump through to fly when she showed up for a flight without any identification (not even a checkbook):

The special T.S.A. agent had me sign a form, allowing the agency to verify my identity. He asked me if I had any other form of identification (I didn’t), or if my husband had anything in his wallet that had my name on it. (Again, no.) I did have a checkbook, bearing checks that had both my name and my husband’s, so I handed that over for him to examine. Then, he called someone else on his phone, and asked me some questions — things like my previous addresses and my date of birth. It reminded me of the online verification process you go through when opening a bank account or obtaining your credit report.

Apparently I answered satisfactorily, because the agent was finally given a number that he jotted on my boarding pass, before waving me on to be screened. The process took about 15 to 20 minutes. I asked if I could have some sort of documentation of the screening process for my return flight, but he shook his head. “Make sure you get to the airport early,” he advised, in case the screening process took longer on the trip home. (It didn’t. The process was much the same, although I was asked slightly different versions of the screening questions, and had my hands swabbed before being sent on my way.)

We made our outgoing flight with a few minutes to spare, but the whole process was very stressful. I know that it’s ultimately my fault that I left my wallet behind in the rush to get out of the house. But I can’t help but blame the airline’s extra baggage fees. If I hadn’t had to grab my credit card from wallet to pay for them, my wallet wouldn’t have been out of my purse in the first place.

That's incredibly stressful when trying to catch a plane. By contrast, voters who show up on November 4 at polling stations in Wisconsin who lack a valid photo ID may cast provisional ballots, and they have three days' time to come back and establish their identity. From the Wisconsin Government Accountability Board website: