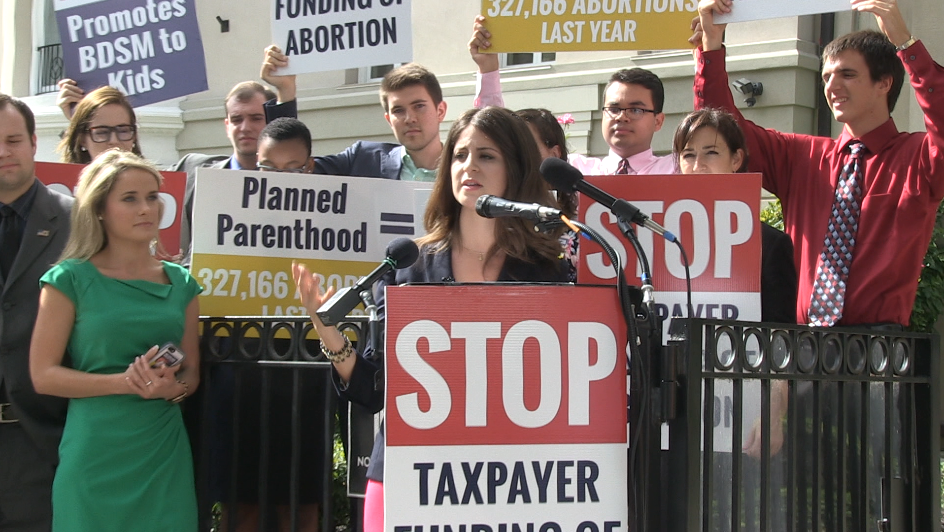 Here’s something the pro-abortion media won’t want to hear: the risks the pro-life movement will take to defend the defenseless and speak for the voiceless.

On Tuesday, Oct. 14, pro-life advocacy group Live Action hosted a news conference in front of the Washington, D.C. Planned Parenthood. The event criticized taxpayer funding of abortion through ObamaCare, as brought to light in a new GAO report. The prospect of having to participate in plans that cover abortion (there are five states in which all ObamaCare plans cover abortion) had pro-life leaders talking about civil disobedience.

At the conference, Live Action President Lila Rose explained “government subsidies are going to Planned Parenthood currently, and that under Obamacare, 1,000 healthcare plans are now covering abortion.” The pro-life movement should refuse “blood money” “no matter the cost” – even, as Ryan Bomberger of The Radiance Foundation suggested, to the point of civil disobedience and prison.

In an interview with the Media Research Center, Lila Rose said the pro-life movement should respond with civil disobedience, to the extent of even facing prison. “I think that, if it comes to us having to not purchase plans that include abortion, absolutely. We can’t violate our consciences,” Rose argued, “That’s something that we have to refuse to do in the end, no matter the cost.”

“We’re being forced to violate our consciences or else pay fines or suffer other penalties,” Rose stressed, “but we can’t do that.” “We can’t purchase abortions,” she repeated. “We can’t purchase the killing of children. It’s blood money, and it’s committing a human rights abuse.”

Responding to the same question, Ryan Bomberger (himself conceived in rape) said, “I think we have to be willing” to pay fines or face prison.

“Civil disobedience is a powerful thing,” he explained. “We can see it throughout American history. Look at the civil rights era. Look at the incredible results that came from that non-violent form of protest.”

For the pro-life movement, Bomberger wished the same outcomes:

“I hope that not just pro-lifers today, but those that become pro-life tomorrow and the next month are passionate enough to say, ‘You know what? This may mean prison. This may mean I get fired from my job.’"

"I just hope that pro-lifers get to a point where they don’t care about being uncomfortable. What they care about is that this is the social injustice of our day. And so, it’s worth being fired, it’s worth losing friends, it’s worth even losing family members and relationships there, because this is a human rights issue.”

“We’re hated all the time,” he concluded, “that’s a given.” But, “in the end, we’re speaking truth. And I truly believe that we’re transforming hearts and minds one soul at a time.”

As a result, Howard asserted, “You’re going to see pastors rise up and say, ‘I’m not okay with it, and I’m not going to let my congregation continue to partake, with their funds, and their energy, to be sold out and lied to by organizations like Planned Parenthood.’”

But Howard expressed hope for the future. “Forty years ago, they said that the debate on abortion would be done in Roe v. Wade,” she began. “Now, forty years later, we have stories, history and science behind us to explain what so many thought they knew and were willing to uphold then: that life in utero is precious. “

In regards to the media coverage of federal funding for abortion, Howard emphasized how “the media has dropped the ball.”

Howard urged, “We have to continue to do better, continue to use other platforms – social media being one of them – to encourage, inform and educate young people and America on what’s really going on.”

Besides Rose, Bomberger and Howard, the event boasted speakers including pro-life activist Jill Stanek, Joshua Duggar of The Family Research Council and Missy Martinez of Students for Life of America.

— Katie Yoder wrote and reported this story. Katie is Staff Writer, Joe and Betty Anderlik Fellow in Culture and Media at the Media Research Center. Follow Katie Yoder on Twitter.