Dyson rushed to defend Dolezal from the criticism because she promotes the NAACP’s liberal agenda and asserted: “I bet a lot more black people would support Rachel Dolezal than would support say Clarence Thomas.”

After the MSNBC contributor argued that for those “who talk about race as a social construct, that’s it’s more complicated” because some say “Bill Clinton is the first black president though he didn’t claim to be black” Dyson smeared Clarence Thomas and argued that as a conservative African American he would have less African American support than Rachel Dolezal.

Schultz complimented Dyson’s “very profound point” before he fretted that Dolezal’s actions might “do harm to the NAACP” which his guest resoundingly rejected. Instead of questioning the NAACP official’s actions, Dyson turned his attack on her parents for daring to tell the public who their daughter truly is:

She's trying to eradicate and erase all the vestiges of racism in the broader culture. And I think her parents have to be pressed a little bit, what is your overinvestment in insisting that she be white. I mean, this is a complicated issue here that needs to be talked about in much more sophisticated terms.

Dyson is no stranger to attacking Thomas and in June of 2013 he called the Supreme Court justice a “symbolic Jew” that had “invited a metaphoric Hitler to commit Holocaust and genocide upon his own people.”

MICHAEL ERIC DYSON: Yeah, it's striking to me that her parents want her to pledge fidelity and loyalty to her true roots. You know, but what Rachel has suggested, is that she has embraced an African-American culture, a black identity, that seems to run counter to what her parents desire. Now I understand people getting upset on the black side, on the white side, saying just be who you are and stand up for what you stand up for. I get that Ed.

But on the other hand, those of us who talk about race as a social construct, that’s it's more complicated, Bill Clinton is the first black president though he didn't claim he was black. It means that she may not be African-American, but she certainly could be black in a cultural sense. She's taking on the ideas, the identities, the struggles. She’s identified with them. I bet a lot more black people would support Rachel 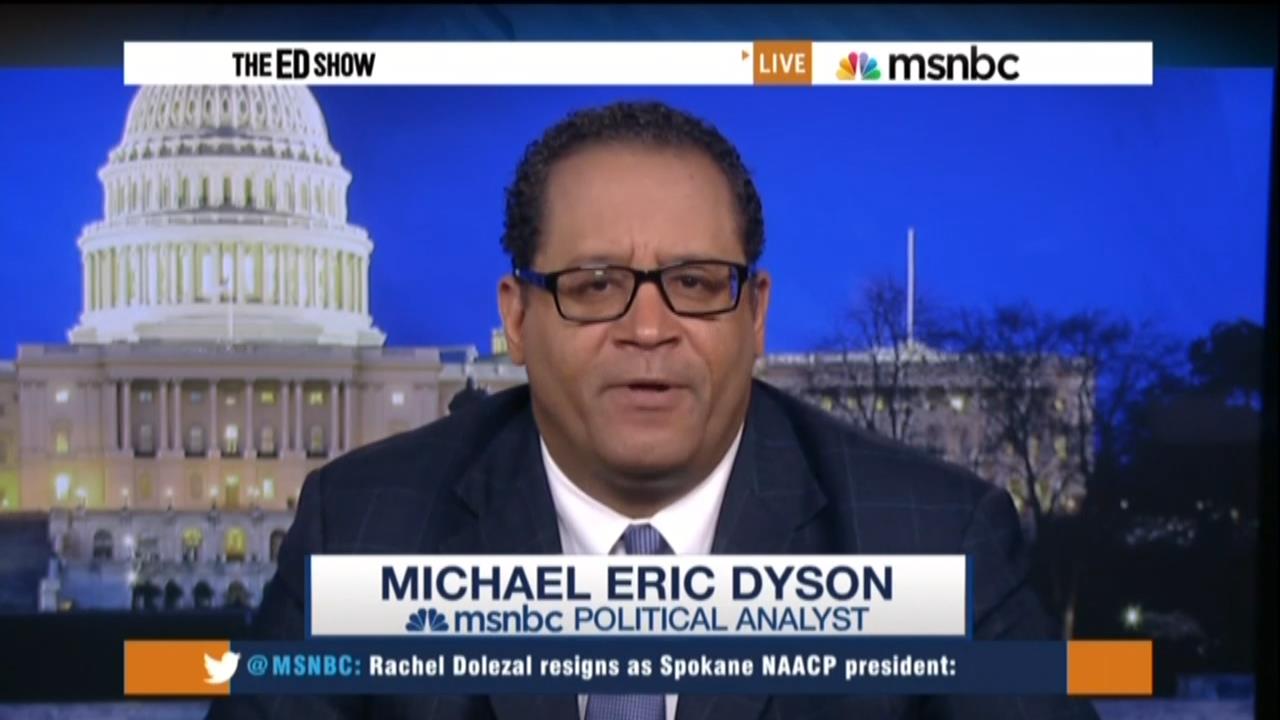 Dolezal than would support say Clarence Thomas. So the point is, how do we talk about useful blackness, the utility of blackness and the service of justice, and I think here we haven't answered that question yet.

SCHULTZ: Well, you bring up a very profound point. What is the downside of someone who wants to be in the struggle and make a wrong right?

SCHULTZ: Does she need to apologize, as you see it? Does Rachel Dolezal, is this such a personal issue, or did she do harm to the NAACP?

DYSON: I don't think she did harm to the NAACP. There are many people who lack her commitment. And I think her commitment is profound and I think it’s just and I think it’s beautiful. If she feels like apologizing to people that she may have personally misled, who felt, oh, I thought you were black and you weren't. But then we got to ask a broader question. What does it mean to be black? How do we signify that blackness in the culture where blackness is complicated.

She's not the son of Tom Hanks who wants to use the n-word thinking that he has earned the right as a white guy to hurl an epithet against an African-American person. That’s not what she’s doing. She's trying to eradicate and erase all the vestiges of racism in the broader culture. And I think her parents have to be pressed a little bit, what is your overinvestment in insisting that she be white. I mean, this is a complicated issue here that needs to be talked about in much more sophisticated terms.