On Tuesday night, Hardball host Chris Matthews decided to use Senator Mitch McConnell’s (R-KY) latest campaign ad as the perfect opportunity to mock the Republican’s attempt to add some humor into the Kentucky Senate race.

After showing the McConnell ad, which featured the GOPer playing with several bloodhounds, a reference to his famous ad from the 1980s, Matthews disgustingly asked his audience if they “remember the picture of Saddam Hussein patting the kid’s head? Anyways you saw that.” 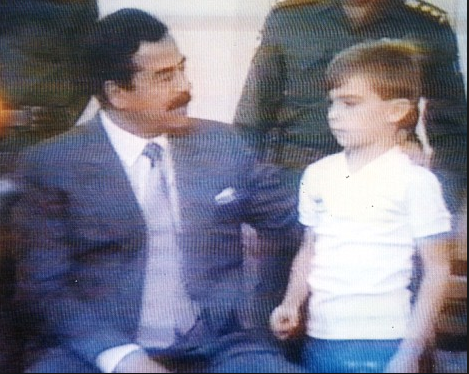 Matthews began his attack of McConnell by declaring “last week he loaned his campaign nearly $2 million of his own money which is usually a fairly good sign of a nastily close race. He’s put that money towards a new, how’s this, positive campaign ad. Trying to show off, I didn’t know there was such a thing, his lighter side.”

Matthews’ reference to Saddam Hussein came from the famous 1990 image of a young Stuart Lockwood, a British child who along with his family and other Westerners were held hostage by the Iraqi government in the lead-up to the Kuwait War.

The MSNBC host never explained how McConnell playing with multiple dogs is akin to “Saddam Hussein patting the kid’s head” but such extreme comments are commonplace for Chris Matthews and it is unlikely that he will ever apologize for his offensive rhetoric.