During the interview, Norah O’Donnell asked Senator Warren “what's going to happen if Republicans take control?” before admitting “I guess that was a softball of a question, wasn’t it?”

Predictably, Warren proclaimed that “it's going to be ugly out there if the Republicans take control” to which co-host Charlie Rose chimed in that O’Donnell “just teed it up for you." Neither CBS host seemed bothered that they were joking about throwing softballs to Senator Warren and instead laughed at the easy questions they gave the her.

Conveniently, O'Donnell made sure to downplay the significance of a potential GOP midterm victory and insisted it was merely part of the standard electoral cycle:

You serve in the U.S. Senate. Democrats are in control. The Republicans need six seats. On average, since World War II the opposing party of the president has won about six seats.

As the segment progressed, Rose lamented to Warren that Democrats hadn’t pushed their liberal economic agenda harder throughout the election cycle:

The softball questions continued when Gayle King eagerly put on her Democratic Party hat and pressed Warren on how "we" the Democrats can maintain control of the Senate:

As the pro-Warren segment concluded, Charlie Rose propped up the liberal Massachusetts Democrat one last time by noting how “she [Elizabeth Warren] said, I like to stir things up, you know? I like to be a troublemaker.”

Tuesday’s interview was not the first time CBS This Morning championed Senator Warren’s liberalism. In April, the three co-hosts repeatedly praised the Massachusetts Democrat and urged her to run for president. 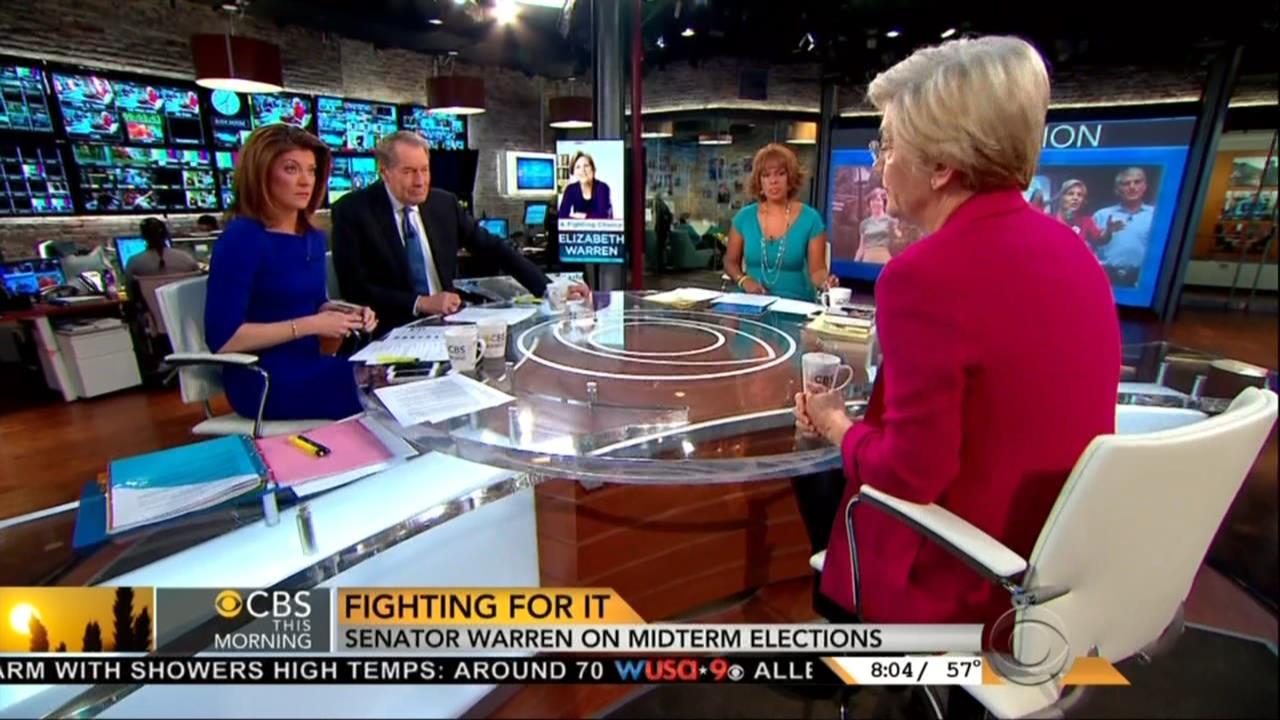 CHARLIE ROSE: The government’s response to Ebola is tied to the elections just a week away. The latest CBS News/New York Times battleground tracker indicates Republicans are poised to take the Senate with 51 seats. Democrats are not ready to concede.

NORAH O’DONNELL: Senator Elizabeth Warren says her part needs to stand up and fight. She’s become a sought after campaigner in a number of key races. Her message to voters focuses on middle class opportunities. It's also a big theme in her memoir "A Fighting chance.” Senator Warren is here with us. Good morning.

O’DONNELL: We are one week out from the midterms. We want to get to sort of politics, what’s going on in the country. But first on the issue of Ebola. Governor Chris Christie said this morning he doesn't think his policy of involuntarily quarantine is Draconian. He said the CDC has been behind on this.

WARREN: Well, he should bring out the scientists who are advising him on that. Because we know that we want to be led by the science. That's what's going to keep people safe, science, not politics. I think that's what's critical.

GAYLE KING: Are you worried about it?

WARREN: Of course. Well, of course, I'm worried. Part of this reminds me, this is why elections matter and why they matter over time. You know, Ebola is not new. We've known about it for a long time. And we were putting money into funding Ebola many years ago. And republicans have cut funding overall for medical research. For the National Institute of Health and Ebola has not been a priority.

So now we're in a position where instead of making those investments up front, we wait until people die, now we're going to spend billions of dollars and some real risk to our country. We can't just run this country one crisis to another. What Congress is supposed to do is help us make the investments early and make sure that it keeps us all safe.

WARREN: Oh, it's going to be ugly out there if the Republicans take control.

O’DONNELL: I guess that was a softball of a question, wasn’t it?

WARREN: How many ways can we talk about this?

ROSE: She just teed it up for you. Go.

WARREN: But the Republicans themselves have made this clear. You know, Mitch McConnell who, by the way is getting a real challenge from Alison Grimes. Mitch McConnell says, number one, he's going to make sure that a lot fewer people have access to health care. He's going to repeal the Affordable Care Act and that means young people don't get to stay on their parents policies. You don’t get the business that preexisting conditions you can be cancelled out. You can outrun your insurance coverage.

The second thing he said he's going to right behind that is reduce the accountability of the big financial institutions. Roll back some of what was done in Dodd-Frank. And he said he’s going to make it a first priority to take the legs out from underneath that little Consumer Financial Protection Bureau the one that we all fought so hard for that actually tries to level the playing field so people don't get cheated on mortgages, on credit cards.

That little agency has been in effect three years now. And it has already returned more than $4 billion, forced these big financial companies to return money that they cheated people out of. Now, that's government that works. And that's what Mitch McConnell wants to get rid of. So that’s what’s at stake partly.

ROSE: But I mean, you've made Wall Street an issue in all of your public life and in all your books as well.

O’DONNELL: Yeah, that the Democrats have focused too much on reproductive rights, et cetera.

ROSE: Rather than the economy.

WARREN: I think that we really have a choice here in this election between Democrats and Republicans. And let me make it as concrete as I can because this is where the evidence is. We believe that no one should work full time and still live in poverty and that means raising the minimum wage. Democrats have proposed that.  Every Democrat supports it. If we do that, we literally would life millions of children out of poverty. The Republicans filibustered. Democrats say we need to lower the interest rate on student loans. The government should not be making billions of dollars on profits off the backs of our kids. Republicans filibustered.

ROSE: Okay, but let me ask you, I asked John Dickerson this question and I’m asking you, why is the president so unpopular?

WARREN: Look, let's remember, that the Republicans said we're going to do everything we can to make him a failed president. We're going to block every move –

ROSE: So the president is unpopular because of Republicans?

WARREN: Well, they have made it clear that they don't want Democrats—

ROSE: But the issue they’re making is leadership.

WARREN: And they certainly don't want the president to have any chance to move the American country forward and to help strengthen America's middle class. Look at the things we fought for. Under President Obama's leadership, we fight to raise the minimum wage. We fight to reduce the interest rate on student loans. We fight for equal for equal pay for equal work.

WARREN: I think it's really about whose side do you stand on? And for me, that's the whole heart of it. You can see who's out there fighting to reduce the interest rate on student loans. That's the best example I can get. That all of the Democrats stood up for this. The Republicans filibustered it. And do you know why they filibustered it? They filibustered it because, as they said, you'd have to have millionaires and billionaires throw a little more money into the kitty to make up for this.

ROSE: In your own home state of Massachusetts, "The Boston Globe" just endorsed the Republican candidate for governor. Your home state.

WARREN: I know. I know. I don't -- I think they're wrong on this. But look, there's an example, but it is, it's about whose side do you fight on. Martha Coakley is a wonderful example. She has been for the last years the Attorney General. She's stood up to Wall Street. She's been in there socking on behalf of families. Defense of Marriage Act, she led the way. A woman's rights to be able to go to Planned Parenthood without being harassed. Martha's been on the front line. She’s been working in the public interest. Charlie Baker -- are you ready? Charlie Baker got an award for being the outsourcer of the year. So whose side do you stand on?

ROSE: We have to go. Can I tell people what you told me in the green room?

ROSE: She said, I like to stir things up, you know? I like to be a troublemaker.

ROSE: That’s what you said to me.

WARREN: That's what I talk about in my book "A Fighting Chance." We've got to get out there and stir things up so all our kids get a chance.

ROSE: Be a troublemaker.

O’DONNELL: Senator Warren good to have you here. Thank you so much.

WARREN: It’s good to be here.