The movie star and the millionaire aristocrats have been questioned and found wanting. Uh-oh.

After almost six years of unrelenting class warfare enthusiastically promoted by President Obama, with all the precision of historic inevitability the rhetoric and policies of the Occupy Wall Street enthusiasts have now rounded on two of the more famous members of the One Percent.

And Leonardo DiCaprio and Robert F. Kennedy, Jr. are not happy.

Take a good look at these two clips from PJ-TV’s Michelle Fields, who interviewed both as they played such ostentatious roles in the recent so-called People’s Climate March in New York City. The first, here with an increasingly agitated Kennedy.

The second, here with a tight-lipped DiCaprio - who is eventually saved from himself when a march official physically blocks Fields from asking questions.

Her questions? Ms. Fields wanted to know if the wealthy RFK Jr. would give up his cell phone to protect the environment. And she wanted to know about Di Caprio’s life-styles-of-the-rich-and-famous addiction to carbon-eating private jets, yachts and those several houses the actor possesses. The two very wealthy men - one by inheritance, the other via Hollywood, were furious.

Clearly they have missed the tale of Robespierre and the French Revolution.

The French Revolution, of course, first targeted the one percent of the day. King Louis XVI and his beloved Queen Marie Antoinette were marched to the guillotine. The King and Queen (she who supposedly said of the hoi polloi “Let them eat cake”) may have been among the first targets, but they would not be the last. After lopping off the heads of a good bit of the French aristocracy, inevitably suspicion turned back on the revolutionaries themselves.

A growing number of the revolutionaries were judged to be insufficiently revolutionary. Now proposals floated “to cure economic distress by putting all rich people to death.”  One-time revolutionaries were denounced as “traitors to the Revolution.” One leader turned on the newly suspect -- all of whom were stunned to find themselves so-charged -- and accused that “it is the rich who have reaped, in the last four years, the fruits of the Revolution.”

Observed one Frenchman: “The Revolution is like Saturn, it is devouring its own children.” And so it did, with the revolutionary leader Robespierre, having arranged for the work of the guillotine, eventually found himself losing his own head when seen as insufficient to the cause.

There are few that make better symbols of today’s revolutionary children than Leonardo DiCaprio and Robert Kennedy Jr. Living lives of the fabulously rich, they are awash in a world of private jets, multi-million dollar homes and more. In terms of the climate change issue - their equivalent of the French Revolution - their individual carbon footprints are Grand Canyon-sized.

Reporter Fields’ questions are symbolic of precisely the cries that began to arise in the throats of those French revolutionaries centuries ago.

In the case of Mr. Kennedy, Variety did this spread  on a new home he has purchased in Malibu with his new wife. Spending $4,995,000 to buy a “compound”  that has 2,959 square feet, 4 bedrooms, 3 bathrooms and a lovely pool. It is tactfully noted that the “compound” is within -- gasp! -- a “gated estate.”  No mixing with the peasants for this Kennedy.

In the case of Mr. Di Caprio, this story in the Daily Mail precisely illustrates his French Revolution-style problem. As the story makes clear, on the one hand the actor - who is said to be worth some $220 million -  is lecturing the United Nations on climate change. But…ahem….he divides his time among four homes, private jets and leasing the world’s fifth largest yacht. The latter belonging to…you can’t make it up….an oil billionaire.

That oil billionaire is identified by the Daily Mail as Mansour bin Zayed Al Nahyan of the United Arab Emirates. Which means that the yacht in question - named the Topaz - is in fact a sea-going embodiment of the wealth achieved by investors in fossil fuels. And recall what Mr. Kennedy says of such people. His description of the Koch brothers was “treasonous.” Presumably Mansour bin Zayed Al Nahyan, who is not an American is, under Mr. Kennedy’s logic, “treasonous” to the planet. In the real French Revolution, similar charges did not take all that long to swing back towards those who originated them.

Oil has hoist another famous set of Americans into a French Revolution-style spotlight. The New York Times  reports that the descendants of oil billionaire John D. Rockefeller are divesting the Rockefeller Brothers Fund of oil money. The Rockefellers are, says the Times, divesting “assets tied to fossil fuel companies from their portfolios.”  The hypocrisy, of course, is that there isn’t a single dime in the possession of the Rockefeller family wealth that isn’t tied to oil. And not a single Rockefeller family member has volunteered to step forth and divest themselves of all their oil money. Imagine that.

This is exactly the kind of thing that eventually launched the original French Revolutionaries to, as was observed by that observant Frenchman of the day, eat their own children. Put succinctly? DiCaprio, Kennedy and the Rockefellers, having now stirred the class warfare waters with President Obama, are watching their own credibility being marched to the political equivalent of the guillotine. And as with the original French Revolutionaries they are equal parts baffled, annoyed and angry.

Robert Kennedy’s agitated barks at Michelle Fields were the revolutionary’s version of that old complaint today identified with cornered celebrities: “Don’t you know who I am?” To which an increasing number of Americans, understanding that the game in play is to divest the middle class of their hard-earned incomes in the name of climate change while the liberal rich refuse to do the same to themselves, have an answer.

A case in point with RFK Jr? Famously, his father managed his Uncle John’s 1960 presidential campaign. This included the battle for the Democratic nomination. As the story has been relayed by one JFK biographer and admiring aide after another, a key moment in that battle was John F. Kennedy’s furious fight with then-Minnesota Senator Hubert Humphrey for victory in the West Virginia primary. JFK was at a disadvantage because of his Catholic faith in an overwhelmingly Protestant state. How did he pull out a victory? 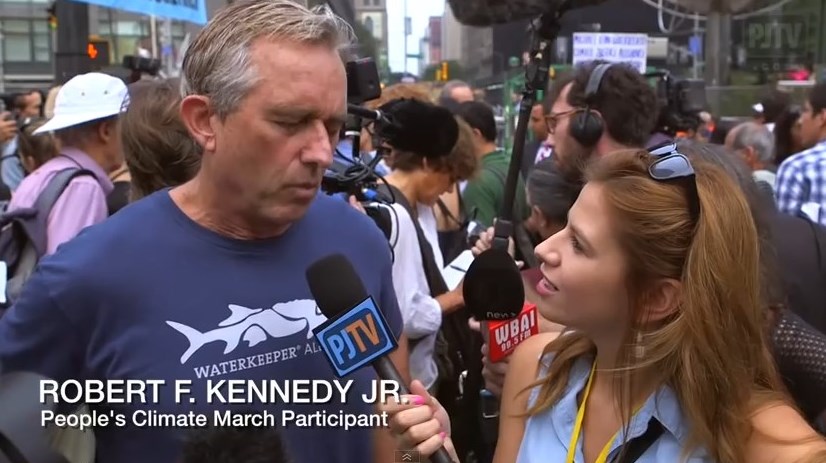 Two of his closest aides, Ken O’Donnell and David Powers, would later tell the tale of JFK in West Virginia this way.  Writing in their book "Johnny We Hardly Knew Ye," the two noted that after dealing head-on with the Catholic issue “Kennedy was winning warm approval and respect from the West Virginians by going into their villages in the mountain range hollows, listening sympathetically to their complaints, and promising to make their troubles known in Washington.

The crowds of miners cheered wildly when he said, ‘President Eisenhower should take Vice-President Nixon by the hand and lead him into these homes in McDowell County and Mingo County and Logan County so he can see how the families of West Virginia are trying to live.’”

JFK not only clobbered Humphrey in the West Virginia primary with the help of all those miners, in November he trounced Nixon, putting West Virginia in the Democrats’ column with the miners.

In 2008 and 2012 West Virginia went for the GOP twice, handing Mr. Obama a pair of brutal defeats. Why? Because today’s West Virginia miners are deeply aware that unlike John F. Kennedy, Barack Obama is not just less than sympathetic to their livelihoods, he is downright hostile. Indeed, to some RFK Jr. has made it his mission to shut down the jobs of miners in what he calls “Big Coal” in West Virginia.

So too has Leonardo DiCaprio declared “we must put a price on carbon.” Coal mining supporters understand this, correctly, as a “war on coal.”  A war on coal led by, in the case of DiCaprio and RFK Jr., people whose idea of sacrifice is a coal miner losing his job. Meanwhile, RFK moves into a multi-million dollar gated Malibu compound, indignant at the thought of even giving up his cell phone. While DiCaprio urges on the war on coal -- then blithely jets off around the world to four homes and an oil billionaire’s yacht.

DiCaprio and Kennedy may have made themselves the twin faces of “do as I say, not as I do.” But there is more going on here, one suspects, than the arrogance of hypocrites.

The spirit of the French Revolution’s “Great Terror” that inevitably led to eating its own revolutionary children is now nibbling at the toes of the American liberal rich, starting with the famous and carbon footprinting Messrs. DiCaprio and Kennedy. Not to mention others like the Rockefellers. The calls for divestment, combined with the Obama-era demands for “fairness”, class warfare and hatred of the rich One Percent are beginning to bite back at the very people who mindlessly encouraged it.

As Michelle Fields discovered on camera, they don’t like it, either.