In a bizarre twist of reality, the Asian American Journalists Association (AAJA) has demanded The Five co-host Andrea Tantaros and Fox apologize for “Islamophobia.”

Why is Ms. Tantaros in the dock? (She actually made her remarks on another Fox show, Outnumbered.) And Fox too?

The AAJA was not pleased, huffing in a news release:  “AAJA calls for Tantaros and Fox News to apologize for the irresponsible, inflammatory statements. We also call on Fox News to discourage its journalists from making blanket comments that serve to perpetuate hate and Islamophobia.” And..oh yes…the group added that: “More alarmingly, Tantaros goes so far as to advocate violence.” Meaning the “bullet to the head” commentary.

To her immense credit, Tantaros flatly refused to apologize. Her exact words via Twitter: “I will not apologize for speaking the truth about radical Islamic jihadism. Period.” 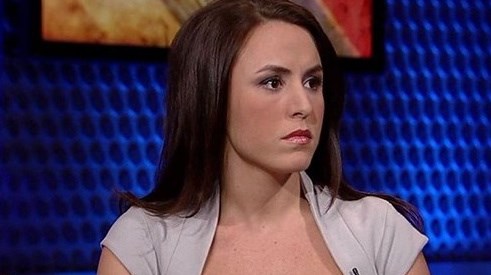 Tellingly, this dustup isn’t just about radical Islam. The criticism of Ms. Tantaros - and Fox - by this specific group calling itself “Asian American Journalists” is a snapshot of exactly what’s wrong in both the “mainstream” media and the larger American society it purports to represents. Let’s begin with the issue of Islam, since this was what launched the AAJA’s demand for an apology.

Not to put too fine a point on it, but the AAJA simply skips over the hard, beyond well-documented truth of Tantaros’s observation that  “They’ve been doing this for hundreds and hundreds of years if you study the history of Islam.” By “this” Tantaros was referring to the beheading of American journalist James Foley as well as Islamic violence in general.
Here’s a link to a book by Andrew Bostom titled Sharia versus Freedom: The Legacy of Islamic Totalitarianism.  Take a good look at the cover, a reproduction, as Bostom identifies it, of a “miniature painting from a sixteenth-century manuscript of Zafarnama by Sharaf al-Din Ali-Yazdi.” Bostom reports that the original was “published/produced in Shiraz, Iran, 1552. It depicts soldiers filing before the Islamized Mongol conqueror Amir Timur-i-lang, or ‘Tamerlane,’ holding heads of their decapitated enemies which they used to build a tower shaped like the minaret of a mosque, in Baghdad (1401).”

Got that? This painting is an in-the-day illustration of Muslims celebrating an Islamic conqueror by depicting all the heads that were cut off by his Islamic followers. So many cut-off heads that “they were used to build a tower.”

Put another way? This painting from 1552 - that would be 462 years ago - is precisely validating Andrea Tantaros when she says: “They’ve been doing this for hundreds and hundreds of years if you study the history of Islam.”
This is verified by Ibn Ish.aq, the ancient biographer (he was born in Medina in 704 A.D.)  who wrote The Life of Muhammed.  So too says the Arab historian al-Tabari (born in 839 A.D.).  Each man reporting on the use of beheading against the perceived enemies of Islam.

Back in 2005 Timothy Furnish wrote in The Middle East Quarterly of the decapitation habit in Islam.

“Some American commentators say that Islamist decapitations are intended as psychological warfare and devoid of any true Islamic content….With such apologetics, Western academics either display basic ignorance of their fields or purposely mislead. The intelligentsia's denial of any religious roots to the recent spate of decapitation has parallels in the logical back flips and kid-glove treatments in which many professors engaged in order to deny a religious basis for violent jihad…..Islamists justify murder and decapitation with both theological citations and historical precedent.”

Mentioned specifically is Qur'an Sura (Koran chapter) (8:12): "I will cast terror into the hearts of those who disbelieve. Therefore strike off their heads and strike off every fingertip of them"

“The Pearl murder and video catalyzed the resurgence of this historical Islamic practice. In Iraq, terrorists filmed the beheadings of Americans Nicholas Berg, Jack Hensley, and Eugene Armstrong. Other victims include Turks, an Egyptian, a Korean, Bulgarians, a British businessman, and a Nepalese. Scores of Iraqis, both Kurds and Arabs, have also fallen victim to Islamist terrorists' knives. The new fad in terrorist brutality has extended to Saudi Arabia where Islamist terrorists murdered American businessman Paul Johnson, whose head was later discovered in a freezer in an Al-Qaeda hideout. A variation upon this theme would be the practice of Islamists slitting the throats of those opponents they label infidels. This is what happened to Dutch filmmaker Theo Van Gogh, first gunned down and then mutilated on an Amsterdam street, and to an Egyptian Coptic family in New Jersey after the father had angered Islamists with Internet chat room criticisms of Islam.”

Add now to that list of the recently-decapitated-in-the-name-of Islam the names of American journalists James Foley and Steven Sotloff  Add as well everything from 9/11 to the rockets of Hamas, to bombing attacks in Britain, Kenya, Spain, Indonesia, India, Sweden and China. Not to be forgotten is the Boston Marathon bombing along with the meat-cleaver murder of British soldier Lee Rigby on the streets of London, the attack on the USS Cole and others. Every single one of these and more done in the name of Islam.  Not to mention, of course, the recent “convert or die” beheadings and crucifixions in the IS-controlled sections of Iraq and Syria - beheadings that included children.

In other words, well-aside from recent events, there is literally ancient chapter and verse - not to mention artwork- to show that Tantaros was spot on accurate. Islamaphobia? It would be more accurate to say that the AAJA has a problem with Islamophilia, a rose-colored glasses view of Islamic reality both ancient and modern.

If any apology is owed, it would be the AAJA to Andrea Tantaros and Fox. Better yet, will the AAJA begin to ask whether radical Islamists will apologize to the families of those they have beheaded? Or ask them to apologize for Westernphobia? Or Ameriphobia? Or, to be blunt, do the journalists of AAJA who feel compelled to identify themselves by race - in a country built on colorblind ideas of freedom and liberty - see any connection between the severed heads depicted in that painting…and their own intolerance?

And speaking of apologies and intolerance? A trip around the AAJA website shows the group is itself typical of that Stalinesque toxic mix that is identity politics and political correctness. Not only self-identifying by race in a fashion that would make segregationists proud, but providing a list of apologies demanded from others for imagined offenses. All while providing -- literally -- an alphabetical list of terms they find offensive.

The apology demands include one to the New York Post (for depicting a Yankee baseball player from Japan as a “Bronx Bomber” - the Yankees nickname - in a plane with Japanese markings), to a Portland, Oregon radio station  for a billboard that used the line “We love you long time” from the old movie Full Metal Jacket -- deemed offensive to Asians. (The film was directed by legendary director Stanley Kubrick, its screenplay Oscar nominated.) Also included are apology requests to ESPN for a Little League broadcast and the liberal talk radio host Stephanie Miller.

Perhaps the most chilling part of the site is the “AAJA Handbook to Covering Asian America.” In reality it is a list of perceived slights to anyone describing themselves as “Asian American.” It runs from “A” for “Aliens” (which includes a note to “See ILLEGAL ALIEN”) to “Y” for “YELLOW SKIN, Asian-ness of:”.  Words are flagged with warnings such as “Caution” or “Avoid” to let (presumably) the non-Asian-American journalist know just how close they are to violating the politically correct statute of perceived offenses.

On the list? “AMERICAN” which, among other things, we are helpfully informed is “Not a synonym for white.” Under “C” is “COLONIALISM:”, which mysteriously only mentions that Europeans colonized “many but not all” Asian countries. There is not a word about Asian colonizing (not a peep about Japan colonizing in Manchuria or Korea). “ILLEGALS”? We’re told: “Avoid. A slur.” And so on, and so on.

What does this have to do with the demand for an apology from Andrea Tantaros and Fox over comments on the historical violence of Islam?

The AAJA is in fact not about Asian-Americans, much less being an organization of color-blind American journalists. It’s real mission is all about liberalism. Liberalism’s horrific history of judging others by skin color includes Franklin Roosevelt’s internment of Americans of Japanese descent during World War II, one of the more outrageous examples of what happens when liberals judge by skin color.  Which is, by definition, ironically what the AAJA is all about.

In today’s world, not being honest about the historic nature of Islam is at the very heart of identity politics and political correctness in the mainstream media. The foreword to Andrew Bostom’s book is written by Andrew McCarthy, the prosecutor of the Islamic radical “Blind Sheikh” Omar Abdel-Rahman. Notes McCarthy of those Americans who deny the reality of Islamic terrorism: “The goal is clear: to make Islam appear unthreatening, to limn its detractors as irrational and racist (‘Islamophobes’), and thus to control the narrative…” by handing it over “to Islamic activists and their apologists.”

What was at work in the AAJA demand for an apology from Andrea Tantaros and Fox was exactly that. The work of apologists for Islamic radicalism. In fact, the group illustrated McCarthy’s point precisely by claiming that Tantaros and Fox were perpetuating “Islamophobia.”

One can only wonder. If James Foley or Steven Sotloff had been an “Asian-American journalist,” would the AAJA be demanding an apology from ISIS for their beheading? And would they get it? What do you think?