'Sex and the City' Star Amazed by Mayor De Blasio, He 'Makes My Head Spin' 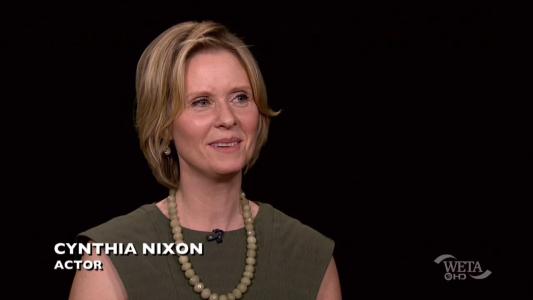 Actress Cynthia Nixon couldn’t be happier with the job ultra-liberal New York City Mayor Bill de Blasio is doing as she gushed to Charlie Rose: “I think he’s doing amazingly...He is a big, bold progressive and he has an...incredibly ambitious agenda...When I look at the things he’s done in such a short time...it makes my head spin.”

Invited on Tuesday’s edition of PBS’s Charlie Rose show to plug a new play she is directing, the former star of HBO’s Sex and the City admitted she was close friends with De Blasio and bragged about the accomplishments of the “big, bold progressive” mayor. Nixon’s use of “progressive” instead of “liberal” prompted Rose to ask why she preferred the “p” word to the “l” word.

Nixon responded: “Everybody today says progressive...liberal got tainted with like well, you say one thing but maybe you know maybe it’s more of a pose. But I think progressive implies progressive in every sense in that, you know, liberal has a kind of a rich person taint to it whereas progressive is like everybody in every class.”

The following exchange was aired on the March 17 edition of PBS’s Charlie Rose:

CYNTHIA NIXON: I am.

ROSE: And that goes back before he was mayor.

NIXON: Yes that goes back -

NIXON: - even before he was a public advocate when he was in the city council, yeah. He was -

ROSE: Having to do with educational issues or -

NIXON: He was always such a, such a staunch ally for us in the public schools. Yeah.

ROSE: Yeah and you had campaigned hard for him.

You know the idea that in, in one year we go from having, you know, public pre-k for, full day public pre-k and after middle-, after school for any kid who wants it. That’s extraordinary.

ROSE: That’s his, that’s his most important achievement so far?

NIXON: Yeah but I also think that, you know, 200,000 units of preserved or built affordable housing. I mean that’s, that will have maybe even a greater impact on the city.

ROSE: You said progressive rather than liberal. Any reason you said that or just -?

NIXON: I mean he is a liberal, you know.

ROSE: But everybody today says -

NIXON: Everybody today says progressive. I think, right, I think that there is - that liberal got tainted with like well, you say one thing but maybe you know maybe it’s more of a pose. But I think progressive implies progressive in every sense in that, you know, liberal has a kind of a rich person taint to it whereas progressive is like everybody in every class.

NIXON: I think so. You know the liberal with the limousine. You know? We have that -

ROSE: The Limousine Liberal. That’s what -

ROSE: But that was a kind of a notion of contempt I thought. That was - Limousine Liberal, yeah.

NIXON: Exactly! That’s what I was saying, that’s what I’m saying. And there was, you know, there was an old song. “Love me, love me, love me I’m a liberal. Do you know meaning? I say these things out of one side of my mouth but not really.”