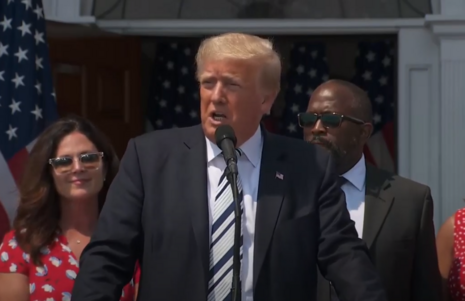 Big Tech corporations have a notorious history of silencing conservatives on social media platforms, but their tyrannical practice of censoring opinions that they disagree with may come back to haunt them. Former President Donald Trump has decided to fight back and take legal action against the Big Tech platforms that banned him earlier in the year.

Trump announced that he would file lawsuits against Facebook, Google and Twitter, as well as their top executives Mark Zuckerberg, Sundar Pichai and Jack Dorsey at a July 7 press conference. “We’re asking the U.S. District Court for the Southern District of Florida to order an immediate halt to social media companies’ illegal, shameful censorship of the American people,” Trump said in the press conference.

Trump discussed the actions the lawsuit would ask the court to take. He said that the lawsuit “seeks injunctive relief” and is “asking the court to impose punitive damages on these social media giants.” Trump stated further: “In the end, I am confident that we will achieve a historic victory for American freedom, and at the same time, freedom of speech.”

He also bashed Section 230 of the Communications Decency Act: “While the social media companies are officially private entities, in recent years, they have ceased to be private with the enactment and their historical use of Section 230, which profoundly protects them from liability. Once they got Section 230, they’re not private companies anymore in a lot of views.”

Trump and his legal team did not mention a specific date that the lawsuit would be filed.

Big Tech’s vendetta against Trump dates back several years. Twitter censored Trump 625 times between May 31, 2018, and Jan. 4, 2021, before he was kicked off the platform. The company has since refused to allow him back. Twitter did not censor President Joe Biden at all during the same period of time. Trump was also banned from at least nine other platforms after he called for “peace” following the Jan. 6 riot at the U.S. Capitol. He was kicked off of YouTube, Twitter, Facebook, Instagram, Twitch, Stripe, Snapchat, Reddit, TikTok and even Shopify. Facebook later announced that the former president would be suspended for at least two years.