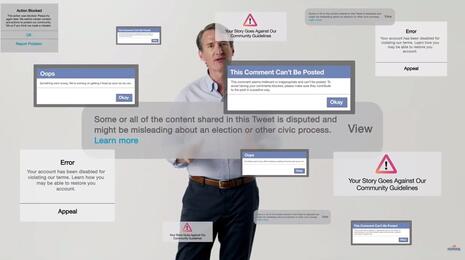 The fight against Big Tech censorship has long been a rallying cry for conservatives. Now, one Virginia candidate has promised to take action and fight for America’s First Amendment rights.

Youngkin’s ad made his position against Big Tech clear. “A handful of California megacorporations are deciding who can say what, promoting positions that they agree with, and canceling conservative opinions and religious beliefs,” he said. “As governor, I'll fine Big Tech companies that silence Virginians, and I will never apologize for standing up for the First Amendment.”

The former Carlyle Group executive has been particularly vocal about Big Tech censorship on the campaign trail. “This is a concern I hear over and over from voters: what can we do about these powerful corporations?” Youngkin told MRC Free Speech America in a statement. “I think it’s a huge issue, and that’s why I wanted to make it clear that when I’m governor, I will stand up for Virginians and stand up to [B]ig [T]ech censorship and corporations seeking to decide the boundaries of our public discourse.”

Youngkin further explained the dangers of censorship in a recent statement to Townhall: “Today’s overt canceling of views, voices, and opinions is dangerous and un-American.”

State lawmakers, it appears, are fed up with Big Tech. Nebraska state Senator Curt Friesen (R) bashed Big Tech companies that are “answerable only to their shareholders” and provide “zero due process or accountability.” But Friesen was not alone. Texas Attorney General Ken Paxton said in a call with MRC, “Unless we start addressing this very soon, we may lose our opportunity to address some of the wrongs.”