WATCH as Sen. Marsha Blackburn BLASTS Big Tech at CPAC: ‘We Are Going to Fight Back’ 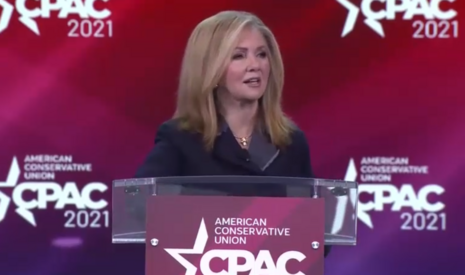 The left has doubled down in its battle against free speech online, but one prominent senator has called for conservatives to “fight back” against Big Tech tyranny.

“Big Tech, Big Media, and the Democrats are never going to stop trying to silence us, but they don’t realize we are going to fight back,” said Blackburn.

Blackburn blasted the hypocrisy of Big Tech’s censorship of former President Donald Trump, while turning a blind eye to other world leaders who have real records of ruling their people with fear. “If you go on Twitter today, the supreme leader of Iran, Xi Jinping from China, Putin and other despotic leaders, they are on there spewing their hate, their vitriol. They have not been fact-checked or banned that I can find, but us conservatives, we have had to put up with this [censorship].”

She emphasized the Orwellian goal that Big Tech has in mind for the American people. “This is more than content moderation, which is what ‘Big Tech’ likes to say they’re doing,” Blackburn said. “Just making certain [that] people are polite. This is about controlling what you see, hear and say, thereby what you think, and how you vote. The left is telling you to submit, or they will cancel you. Conform, or they will cancel you. Sounds a lot like communist China, doesn’t it?”

Blackburn also called out the “cozy relationship” between China and Big Tech. “Big Tech is aiding and abetting the Chinese Communist Party in their push for global dominance, and we are going to have to stand against it,” she said.

Many conservatives share Blackburn’s grievances against Big Tech. Twitter’s platform clearly has little issue leaving up blatant Chinese propaganda, or tweets from Iran’s Ayatollah Khamenei that call for “firm, armed resistance” against the Jewish people. Meanwhile, the platform censored Trump 625 times between May 2018 and January 2021, but it did not censor President Joe Biden at all during that time. Both Facebook and YouTube have also cracked down on what they deem to constitute “misinformation” regarding the COVID-19 vaccine. YouTube also censored the pro-life LifeSiteNews channel.