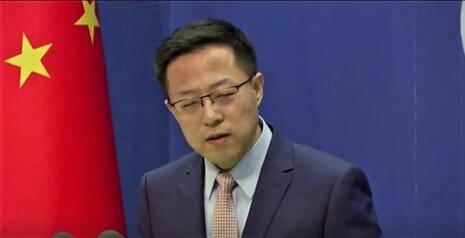 Australian Prime Minister Scott Morrison has demanded that Twitter take action against what he called a “repugnant” tweet from Lijian Zhao, the spokesperson for the Information Department of China’s Foreign Ministry.

Lijian, in a tweet pinned to the top of his account page, wrote: “Shocked by murder of Afghan civilians & prisoners by Australian soldiers. We strongly condemn such acts, &call for holding them accountable.” The tweet included a picture of what appears to be an Australian soldier holding a knife to a child’s throat, and said: “Don’t be afraid, we are coming to bring you peace.” Twitter has labeled Lijian’s account as an official Chinese government account.

“It is utterly outrageous and cannot be justified on any basis,” Morrison said, according to Al-Jazeera. “The Chinese government should be utterly ashamed of this post. It diminishes them in the world’s eyes.”

This is not the first time that Twitter has allowed dangerous Chinese propaganda on the site. Twitter allowed Lijian to scapegoat the U.S. military as the source of COVID-19. The platform also allowed a video from the Chinese embassy in France entitled “Once Upon a Virus,” which contained several myths and pretended that the Chinese government and the World Health Organization were forthcoming about the virus.

It appears as though Twitter is more concerned about misinformation from American government officials, not from a country that has put Uighur Muslims and other minorities in concentration camps.