Sen. Josh Hawley (R-MO) joined the June 8 edition of Tucker Carlson Tonight to expose new whistleblower documents blowing the lid off of the nefarious designs of the Biden administration’s Disinformation Governance Board. 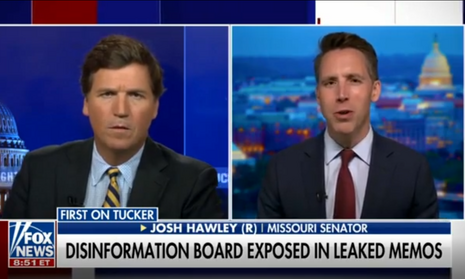 New Department of Homeland Security (DHS) documents posted on Hawley’s website reveal that the department “drafted plans for the Disinformation Governance Board as early as September 2021,” according to a press release from Hawley’s office.

In addition, the press release says the DHS “explored the possibility of partnerships with Big Tech companies like Twitter to assist in their efforts.” The leaked documents characterized questions on the validity of the 2020 election, questions on the origins and effects of COVID-19 vaccines and questions on the efficacy of masks as “homeland security risks.”

One document even cited so-called “domestic violent extremist (DVE) groups” who supposedly amplify and exploit narratives in the public discourse, such as “disinformation surrounding the validity of the 2020 election underpinning calls to violence on January 6, 2021.”

Hawley summed up the chilling findings in one powerful statement to Fox News host Tucker Carlson: “The people that the Biden Administration thinks are the real threat to America – it’s not the drug cartels. It’s not foreign threats. It’s you. It’s the American people.”

Hawley’s press release noted that the DHS “planned for a partnership with Twitter to suppress disfavored content and planned a meeting with Twitter executives exploring the concept.” As Hawley told Tucker, “The whole idea here — and the documents show this — is that the government would get together with Big Tech and collect information on Americans who were raising these questions.”

Hawley and Sen. Chuck Grassely (R-IA) sent a letter to DHS Secretary Alejandro Mayorkas citing “concerns that DHS could be seeking an active role in coordinating the censorship of viewpoints that it determines, according to an unknown standard, to be [mis-, dis-, and mal- information] by enlisting the help of social media companies and big tech.”

The letter even mentioned specifics regarding DHS’s coordination with Big Tech on supposed anti-disinformation efforts. ”We obtained draft briefing notes prepared for a scheduled April 28, 2022, meeting between Robert Silvers and Twitter executives Nick Pickles, Head of Policy, and Yoel Roth, Head of Site Integrity. The notes are marked ‘TBC,’ and it is unclear whether the scheduled meeting actually took place.”

The letter slammed Mayorkas for allegedly avoiding discussing the true purposes of the DGB:

Documents show that, contrary to your May 4, 2022, testimony before the Senate Committee on Homeland Security and Governmental Affairs, the DGB was established to serve as much more than a simple ‘working group’ to ‘develop guidelines, standards, [and] guardrails’ for protecting civil rights and civil liberties. In fact, DHS documents show that the DGB was designed to be the Department’s central hub, clearinghouse and gatekeeper for Administration policy and response to whatever it happened to decide was ‘disinformation.’