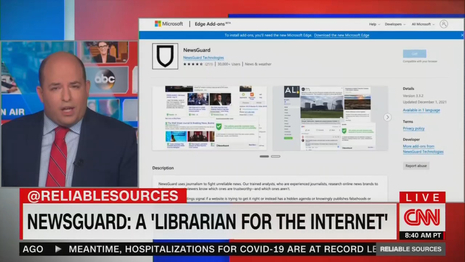 Stelter fawned in a Jan. 16 blog how NewsGuard announced that its business was “reliable enough to turn a profit.” But here was the senseless part: “Although there are many quibbles with specific rulings about certain sites, the results are directionally reliable, distinguishing global newsrooms that try to report fairly from fly-by-night sites that publish propaganda with no regard for reality.”

Nope. A recent study by MRC revealed that NewsGuard’s ratings system, which scores websites on a zero to 100 scale, is extremely biased in favor of left-wing news outlets. The study showed that the average NewsGuard score for the “left” and “left-leaning” outlets was 93/100, while the average rating for “right” and “right-leaning” outlets was a low 66/100. That’s a 27-point disparity.

But Stelter’s promotion of NewsGuard has “no regard for reality.” He seems OK with mindlessly propping up the firm as using “apolitical criteria'' even though that's demonstrably false.  The liberal BuzzFeed News, which “made waves in 2017 by publishing the entire [Steele] dossier smearing former President Donald Trump, sa[id] it has no plans to take the document down.” According to Axios, “[The dossier] is still online, accompanied by a note that says ‘The allegations are unverified, and the report contains errors,’” even though a key source for the document was charged with “lying” to the FBI. NewsGuard still awarded the outlet a perfect “100” score.

Axios slapped down BuzzFeed and others in a piece headlined, “The media’s epic fail,” for pushing the discredited 2017 Steele dossier used to tie former President Donald Trump to Russia. Axios called the occurrence “one of the most egregious journalistic errors in modern history, and the media's response to its own mistakes has so far been tepid.”

By comparison, The Federalist scored a ridiculous “12.5” on NewsGuard. A predominant reason for the abysmal rating, according to NewsGuard, was that The Federalist questioned the efficacy of mask mandates for COVID-19. “[A]political,” Stelter?

Stelter brought two NewsGuard executives on the Jan. 16 edition of his show so he could further propagandize about the firm. NewsGuard “tries to cut through the noise of misinformation and deception and helps advertisers do that by letting them know when their ads are running on sites full of nonsense,” Stelter cheered. How can Stelter cheer about “sites full of nonsense” when rags like leftist magazine The Nation publish ”nonsense” defending “property destruction” as integral to the success of a left-wing “uprising” score a high “92.5” on NewsGuard?

Stelter seemed to suggest on his show that tech giants should employ NewsGuard’s censorship apparatus in their frameworks: “Some advertisers now support NewsGuard and so does Microsoft. Microsoft now pays to license NewsGuard’s tool. Will other tech giants follow?”

Conservatives are under attack. Contact CNN at (404) 827-1500 and demand the outlet stop shilling for NewsGuard’s heavily skewed ratings system.