Twitter’s censorship push against President Donald Trump and his campaign continued this week. The site labeled videos from One America News Network. It also labeled part of an address by Trump, and a tweet by Senator Ron Johnson (R-WI) featuring attorney Jesse Binnall’s Senate testimony about election fraud, among other tweets.

The president’s Twitter account and his campaign account, @TeamTrump, have been censored, suppressed, and limited 583 times since May 31, 2018. Since Dec. 21, both accounts have received 40 more labels. Former Vice President Joe Biden and his campaign, @TeamJoe, have not been censored at all. 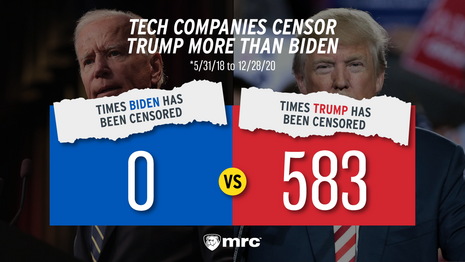 Twitter labeled several One America News Network news clips. A clip discussing a video purporting to show a poll worker in Georgia scanning a stack of ballots multiple times was labeled as having disputed claims about election fraud. A different warning was applied to a clip discussing an op-ed by Newt Gingrich in which he said that he would not accept Joe Biden as president. The label for the Gingrich tweet said that “Election officials have certified Joe Biden as the winner of the U.S. Presidential election.”

Twitter labeled a tweet from Sen. Johnson that Trump retweeted with a “This claim about election fraud is disputed” warning. In his tweet, Johnson linked to the U.S. Senate Committee on Homeland Security and Governmental Affairs hearing, “Examining Irregularities in the 2020 Elections.” His tweet also included a clip from that hearing featuring attorney Jesse Binnall’s testimony. YouTube had previously removed the same clip that was included in Johnson’s tweet.

Twitter additionally found a 10 minute segment from Trump’s December 22 address worthy of a disputed claims label. The address focused on his position on the integrity of the election and why he was continuing to fight instead of conceding.

While the use of a warning label may seem innocuous, labels are a form of censorship. Twitter itself has admitted that it “de-amplified” labeled tweets.