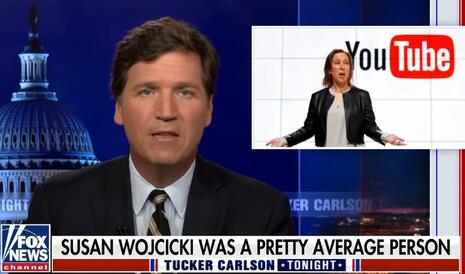 Carlson criticized the blatant hypocrisy of “legacy media outlets” like NBC News, CNN and The New York Times. “You'd imagine that people who make their living on the First Amendment would defend it and lead the charge against censorship. But no, just the opposite in this bewildering time,” he said. “Those people encourage censorship. They're out there in public begging the tech companies to suppress news and information to make certain the public never sees it.”

The Fox News host warned of the dangerous repercussions of rampant censorship and negligent news media. “Pretty soon no one's going to believe anything ever again. And that shouldn't shock you because censorship is always counterproductive. It doesn't work. People know they are being lied to, so they tune it out,” he said.

Carlson pointed to a Reliable Sources interview that YouTube CEO Susan Wojcicki did with CNN’s Brian Stelter. She actually bragged about the platform’s accelerated censorship practices related to COVID-19 when she told Stelter that YouTube would remove “problematic” or “medically unsubstantiated” information. She also clarified her company’s narrow standard for substantiation: “Anything that would go against World Health Organization recommendations would be a violation of our policy. And so remove is another really important part of our policy.” Stelter called her approach “aggressive” but did not press the issue.

Carlson hit Wojcicki for censoring opinions she disagreed with regarding COVID-19 without having any previous experience working in a medical field: “In no sane country would Susan Wojcicki be in charge of determining what constitutes problematic medical disinformation. And certainly, in no sane country would she be allowed to silence physicians who are treating the virus.”

The Fox News host reminded viewers of YouTube’s brazen censorship of Senator Rand Paul’s (R-KY) video criticizing the platform for its censorship of information on the inefficacy of masks. The senator said he has practiced medicine for 33 years, but his criticism of wearing masks contradicted the World Health Organization and by default YouTube’s “COVID-19 medical misinformation policy.” The Times reporting of the story merely denied Paul’s claims and linked to the newspaper’s own counterarguments.

Carlson suggested that if the media will not reject censorship, America must reject the mainstream media. “We have to replace them. We need something new,” he said.