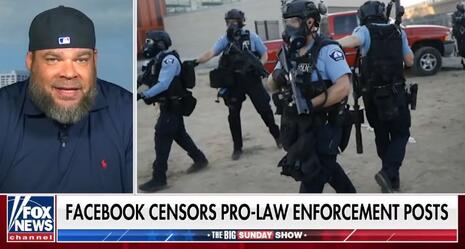 The Illinois Association of Chiefs of Police said it was “flabbergasted” after Facebook rejected an ad recognizing its Officer of the Year award recipient, according to the organization.

The Illinois Association of Chiefs of Police (ILACP), a nonprofit organization, said it tried to use a Facebook ad when recognizing its Officer of the Year award recipient. The ILACP said in a press release that the platform claimed the ad dealt with social and political issues and that Facebook rejected the ad even after the organization appealed the decision. The organization also said that Facebook claimed: “‘[t]his ad content has been correctly disapproved for violation of Facebook Advertising Policies and Guidelines.’” [Emphasis added.]

East Peoria Patrolman Jeffery Bieber was named ILACP’s “Most Outstanding Law Enforcement Officer of the Year.” The ILACP praised Bieber for his handling and survival of an attack in February. The organization reported in a press release that Bieber was responding to a domestic disturbance when a suspect threatened him with a knife. Bieber was stabbed “in the head and neck multiple times, damaging nerves and hitting an artery, causing the officer to bleed profusely." After attempting “less-than-lethal responses,” Bieber discharged his firearm to save his own life, said ILACP Executive Director Ed Wojcicki.

ILACP made a Facebook post honoring Bieber and telling his story. The post received an overwhelmingly positive response. The organization said it then attempted to promote the post as an ad so that more people would see it.

According to the nonprofit, Facebook claimed the post "‘may have been rejected because it mentions politicians or is about sensitive social issues that could influence public opinion, how people vote and may impact the outcome of an election or pending legislation.’" ILACP said Facebook identified the ad as political, making it subject to the requirements of political ads.

A Facebook spokesperson told MRC Free Speech America: “We require advertisers to complete our ad authorizations process and create ‘Paid for by’ disclaimers to run social, issue and political ads.”

Wojcicki questioned how the ad was political: “‘The way we see it is Facebook thinks it’s wrong to honor a brave police officer who suffered serious wounds while protecting his central Illinois city. How is that remotely political?’” He continued:

“Facebook must not realize that many police officers endure severe physical and verbal abuse on a daily basis. Our recognition of Officer Bieber is designed to honor an officer who made a great personal sacrifice and to help Americans understand and appreciate the sacrifices that many officers make.”

The organization has started a petition in hopes that Facebook will still reverse its decision.

Conservatives are under attack. Contact Facebook headquarters at 1-650-308-7300 and demand that Big Tech be held to account to mirror the First Amendment while providing transparency and equal footing for conservatives. If you have been censored, contact us at the Media Research Center contact form, and help us hold Big Tech accountable.