Once again, Twitter’s public safety bureau has slipped up in its charade of making the internet safer for free speech. The platform’s recent censorship of gun-rights activist Kaitlin Bennett (while overlooking death threats against her) has revealed its desire to terminate outspoken conservativism where it can. 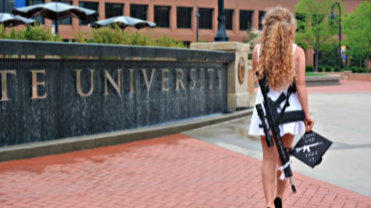 Kaitlin Bennett, grassroots director of conservative group Liberty Hangout, recent graduate of Kent State University, and outspoken Second Amendment rights activist, made a name for herself on social media by taking a visual pro-gun stance during the liberal brouhaha of March For Our Lives. Weeks ago, Bennett generated buzz for herself and the pro-gun cause by posting a picture of herself in graduation attire while holding an AR-10 rifle.

But it was Bennett’s next move that prompted Twitter to pick a side, something it shouldn’t have done if it wants to promote an environment of free speech.

On Wednesday, Bennett posted a photo of herself on Twitter, facing away from the camera and holding two pistols. The caption stated, “If I had a pistol for every gender there is.” It was a clever and lighthearted jab at both rabid gun prohibitionists and the contentious non-binary community – at least that’s what conservative folks thought. However, the next morning, Kaitlin realized that the social justice arbiters at Twitter found it a bit more serious than that.

Twitter pulled the photo and barred Bennett from posting to the social media site for 12 hours, citing the post as “violating our rules against abusive behavior.” Even though that sounds fishy, maybe Twitter was just making a case against speech that is harmful to families and victims of recent shootings and defending the LGBTQ community. Maybe?

Well, the fact that Bennett is receiving unmitigated death threats from strangers all over social media since posting her first pro-gun photo shows something more sinister on the part of Twitter. While she received a cease and desist petition from the social media platform, the accounts that send her death threats on a daily basis received no condemnation or oversight from Twitter at all.

Messages sent to her, such as “Take that gun off your hip, put it to your head, then squeeze,” “Imma smoke yo ass bitch,” or “F-ck you, you ramen noodle-haired, lipless blue-waffled c--t bag,” don’t seem to be considered by Twitter as “abusive behavior in an attempt to harass, intimidate, or silence one’s voice.” But a political opinion different from that of the progressive mob? Sound the alarm.

Bennett posted her story to Facebook, asking readers to share in order “to let the world know Twitter does not welcome conservatives on their platform.” It’s becoming more obvious everyday. No matter what side you’re on, Twitter picking sides is a dangerous prospect, especially when any real hate or threat of violence is glossed over.