Twitter didn’t stop censorship for the Thanksgiving holiday. Algorithms were hard at work flagging and labeling tweets from President Donald Trump and his campaign.

Twitter slapped labels on 63 Trump tweets since Nov. 23. When Trump tweeted: “Big Tech and the Fake News Media have partnered to Suppress. Freedom of the Press is gone, a thing of the past. That’s why they refuse to report the real facts and figures of the 2020 Election or even, where’s Hunter!” Twitter placed a label on the tweet, saying, “This claim about election fraud is disputed.” However, nowhere in the tweet or in the accompanying video was election fraud mentioned. This tweet seemed more of a criticism of Big Tech rather than a statement implying electoral fraud. 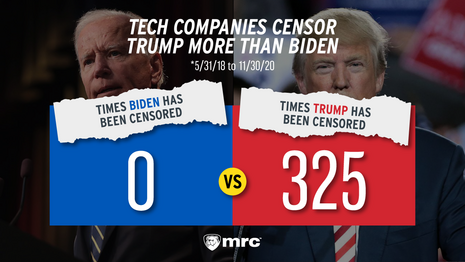 Some of the labeled tweets from the past week include video clips from One America News Network, RNC spokesperson Elizabeth Harrington, and Newsmax. Other tweets highlighted statements from attorney L. Lin Wood, Pennsylvania state senator Doug Mastriano, and author and filmmaker Michael Cernovich. Trump’s interview with Fox Business host Maria Bartiromo was also labeled on the president’s Twitter feed.

Twitter had more in mind when it came to labeled tweets. A Nov. 23 update to the company’s policy announced a new plan to inform Twitter users when they interacted with a labeled tweet. “Giving context on why a labeled Tweet is misleading under our election, COVID-19, and synthetic and manipulated media rules is vital. These prompts helped decrease Quote Tweets of misleading information by 29% so we're expanding them to show when you tap to like a labeled Tweet,” said Twitter.

However, Twitter is willing to work with Biden as president, according to a report from Reuters. Twitter informed Reuters that the company is “actively preparing to support the transition of White House institutional Twitter accounts on January 20th, 2021.”