The Radical Views Behind Facebook’s New Oversight Board

Facebook’s new Oversight Board has been criticized as too liberal and too international to decide on American content. The current structure of the board ensures that. Fifteen of the 20 board members are from outside the United States. Facebook has committed to having only one member from the U.S. on five-person panels ruling on American content restrictions. That means 80 percent could well be international.

Put simply, those ruling on American content won’t be grounded in America’s 1st Amendment ideals. Many will be steeped in the international view of free expression which values safety over liberty. 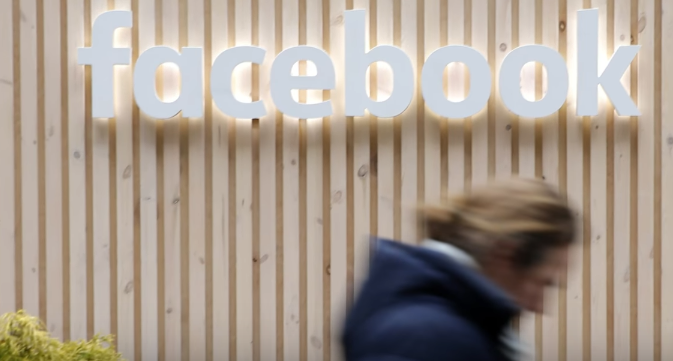 But the board is faced with an even bigger problem — it includes several members whose political views could be described as radical and anti-American.

The social media powerhouse highlighted the free speech credentials of the new members when the board was announced. Facebook downplayed the controversial nature of several of the picks. The board includes Yemeni activist and Nobel Peace Prize winner Tawakkol Karman who has ties to the Muslim Brotherhood, considered a terror group by several nations and affiliated with terrorist Hamas. President Donald Trump proposed designating the group as a terrorist organization in 2019.

Others, like Pakistan’s Nighat Dad or the UK’s Alan Rusbridger have been so opposed to President Donald Trump that they either vowed to avoid the U.S. entirely or urged the press to censor Trump’s press conferences.

Both American liberals named to the board had roles during controversial congressional hearings related to Trump. Stanford University law professor Pamela Karlan made a joke about the president’s 13-year-old son so bad during the impeachment hearings that she had to apologize.

Here are just some of the examples of the radical nature of the Oversight Board:

The Radical Views Behind Facebook’s New Oversight Board

Facebook’s Oversight Board will have the final say on content that gets taken down or left up. With only two conservative voices on the board, conservatives are already poorly represented and that only scratches the surface of the board’s problems. Some of the new members of the board are so radical that they undermine the board’s neutrality.

That raises huge concerns about the Oversight Board’s ability to rule on content, especially given that the American view of free speech differs widely from the view elsewhere in the world.

There are just two right-leaning board members out of the current group of 20 — John Samples and Michael McConnell. Samples is a vice president at the libertarian Cato Institute, while McConnell is a law professor at Stanford University. McConnell, a co-chair of the board, served as a federal circuit judge in 2002-2009. He is now the director of the Stanford Constitutional Law Center.

Several of the remaining 18 members have either radical ties or have made extreme comments. Here are some of the worst:

A Board Member’s Defense of the Muslim Brotherhood

Board member Tawakkol Karman, (pictured) a Yemeni activist and a Nobel Peace Prize winner, stated in a 2013 TV interview with BBC Arabic, that she supported the Muslim Brotherhood. 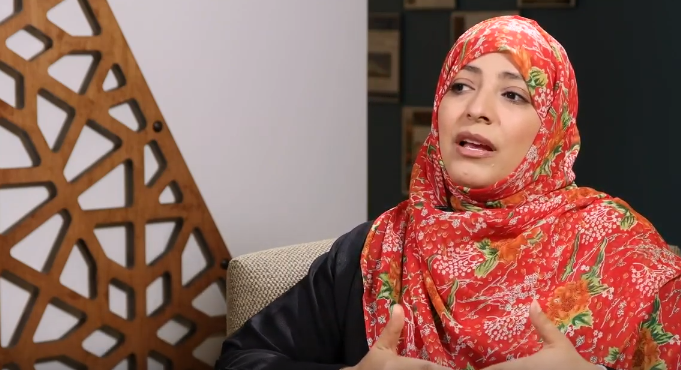 When an anchor asked her to clarify, she said, “You can hear it from me: Yes, at this stage, I am partial toward the Muslim Brotherhood, toward the coalition that rejects the coup against legitimacy, and toward all the Egyptian youths who oppose the coup against democracy, and against the January (2011) revolution. I will not remain neutral in this battle. This is my battle.”

According to The Jerusalem Post, when Karman won the Nobel Peace Prize in 2011, the Muslim Brotherhood’s official English website put out a congratulatory statement, claiming Karman as one of its members.

In 2019, President Donald Trump wanted to designate the Muslim Brotherhood as a terrorist organization. The group has previously been associated with two branches that are already designated as terrorist groups by the Department of State: Hasm and Liwa al-Thawra. Saudi Arabia, Russia, and Bahrain have already designated the Muslim Brotherhood as a terror group.

The Palestinian terrorist group Hamas, which carries out acts of terror on Israeli civilian targets, was at one point a branch of the Muslim Brotherhood, according to Reuters. The Times explained, “Many people who are frustrated with the Muslim Brotherhood’s nonviolence have quit the group for more militant organizations such as Al Qaeda.”

Radical Leftists on the Board

Two members of the Facebook Oversight Board took part in either the impeachment hearings against President Donald Trump and the nomination of Supreme Court Justice Brett Kavanaugh, respectively. 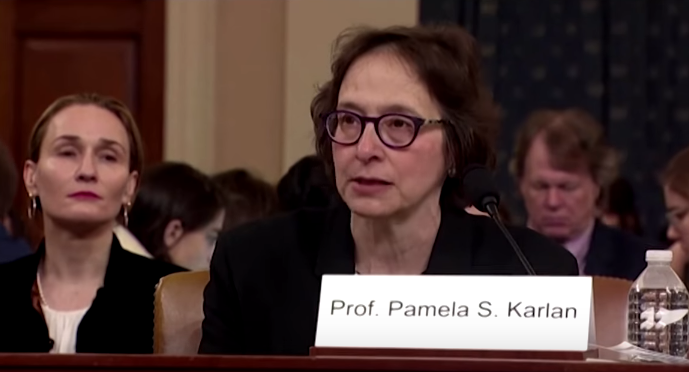 Stanford law’s Pamela Karlan (pictured) insulted Republicans and conservatives alike when she testified at the House of Representatives’ impeachment hearing in December. During that hearing, she made a bizarre and inappropriate joke about Barron Trump’s name that angered the First Lady, as well as the Trump campaign. Melania Trump tweeted in response, “A minor child deserves privacy and should be kept out of politics. Pamela Karlan, you should be ashamed of your very angry and obviously biased public pandering, and using a child to do it.”

The backlash from Karlan’s joke was so strong that she apologized afterward, saying “It was wrong of me to do that.”

In Karlan’s testimony, she called Trump a “president who has doubled down on violating his oath to ‘faithfully execute’ the laws and to ‘protect and defend the Constitution.’” She also accused Trump of striking “at the very heart of what makes this country the “republic” to which we pledge allegiance.”

One of the four co-chairs of the Oversight Board is Jamal Greene, a law professor at Columbia. He also was an aide to Democratic Senator Kamala Harris (D-CA) during the controversial Brett Kavanaugh hearings in the Senate in 2018.

In an essay, Greene wrote that “President Trump’s election is a harbinger of this constitutional failure.” A more egregious tweet from Greene stated, “Hamilton almost certainly would have shot Trump in a duel by now.” 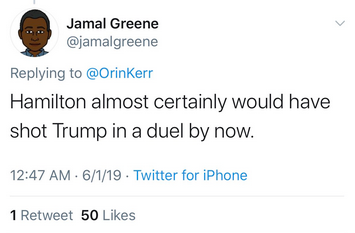 George Soros Has a Louder Voice Than American Conservatives

At least four of the board members and the administrative director are linked in some way to liberal billionaire George Soros, founder of the Open Society Foundations. It is easy to see how the left and the media would respond if a conservative billionaire had that level of outsized influence.

Soros (pictured) has funded the American left with hundreds of millions of dollars, including organizations that seek to silence the right online. He has criticized Facebook in the past for ties to President Donald Trump. In an op-ed written for The New York Times, he wrote that “there appears to be ‘an informal mutual assistance operation or agreement developing between Trump and Facebook’ in which Facebook will help President Trump to get re-elected and Mr. Trump will, in turn, defend Facebook against attacks from regulators and the media.” His solution to the problem? Both Facebook CEO Mark Zuckerberg and COO Sheryl Sandberg should not be in charge of Facebook.

Despite that, the financial ties between Soros and members of the Facebook Oversight Board are strong,. Thomas Hughes is the former executive director of Article 19, a British, free speech non-profit that received more than $2 million from Open Society Foundation. Board Co-chair Catalina Botero-Marino is also a member of the Board of Directors for Article 19.

Afia Asantewaa Asare-Kyei, another member, is a human rights advocate at the Open Society Initiative for West Africa, according to Facebook’s introduction to the Oversight Board. This initiative is a part of the Open Society Foundations Network. It is active in 10 different countries in West Africa, and operates with an eye to developing and maintaining “open societies and inclusive democratic governance.”

Kenyan activist Maina Kiai, another board member, was the head of the Human Rights Watch’s Alliances and Partnerships Initiative. In 2010, Soros and Open Society Foundations announced that they would give $100 million over the course of 10 years to Human Rights Watch. Soros said about the institution: “Human Rights Watch is one of the most effective organizations I support. Human rights underpin our greatest aspirations: they’re at the heart of open societies.”

Finally, Andras Sajo, a distinguished law professor, holds a seat at the Central European University, an institution founded and funded by Soros. Sajo was the founding dean of Legal Studies at the university. Soros gave the university an endowment of $1 billion in 2020.

Facebook is no stranger to controversy when it comes to Soros. Sandberg had requested research into the billionaire in 2018, after Soros had condemned both Facebook and Google as a “menace” at the World Economic Forum in Switzerland in January, 2018. She later apologized to the civil rights group Color of Change for attempting to link them to Soros, even though the liberal organization had received donations from the billionaire. Color of Change then conducted a “civil rights audit” of Facebook, offering suggested changes.

Disdain for American Values and Leadership

Some board members are hostile toward the United States, its defining principles or its leadership. Members have gone out of their way to attack President Trump as “racist” or “fascist.”

Pakistani member Nighat Dad has made many criticisms of Trump, going so far as to tweet, “God forbid if Trump becomes the president, this will be my last visit to US.” In response to President Trump’s ban on transgender service in the military, she tweeted, “Sorry America sad to see what kind of country you have become.” She also expressed her opposition to Israeli Prime Minister Benjamin Netanyahu, saying, “The world needs to build a wall around you and Trump and never let you both come out. #BanTrump.”

Maina Kiai (pictured) slammed the United States in a statement given at the end of an official United Nations mission to the country. He claimed that America was “struggling to live up to its ideals in the area of racial, social and economic inequality.” But Kiai did not hold back on his disdain for the United States president: “I think that Donald Trump is the jewel in the crown of the far right, fascist, xenophobic, right-wing groups that exist,” he said. 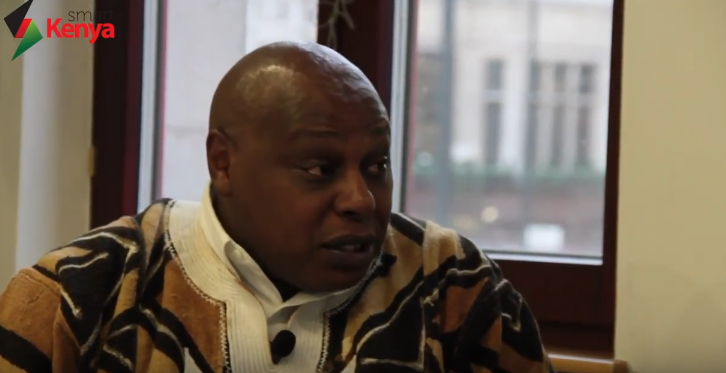 Kiai actually criticized the American principle of freedom of speech when it came to dealing with “hate speech.” He said in an interview, “Americans are the ones who say hate speech is alright as long as it doesn’t lead to violence. We need to counter that--first intellectually, but also in practice.”

According to Kiai, any values that did not “contribute to human dignity and tolerance” should not be considered values. “That includes hate speech,” he said. “I don’t think that the right to expression and the right to association should mean that everything goes.”

Former editor of the Guardian, Alan Rusbridger, wrote that he believed that the media should stop covering Trump pressers. He tweeted, “There is no public interest in spreading disinformation. Completely agree that media should stop live broadcasting Trump, especially since he rejects robust challenge from reporters.” Rusbridger also tweeted that “poundshop oligarchs around the world are now taking the Trump playbook.”

Australian member Suzor even went so far as to question whether or not Trump should be banned from Twitter, tweeting, “Surprisingly, I think it’s complicated.” He also gave his approval on Twitter to a column from Teen Vogue headlined, “Teen Vogue vs. Trump, American Vogue vs. Hitler.”

Endy Bayuni, the former editor-in-chief of the Jakarta Post, wrote in an op-ed for Nation Thailand, “Authoritarian regimes and dictators around the world must feel vindicated by the just-concluded presidential race in the United States.”