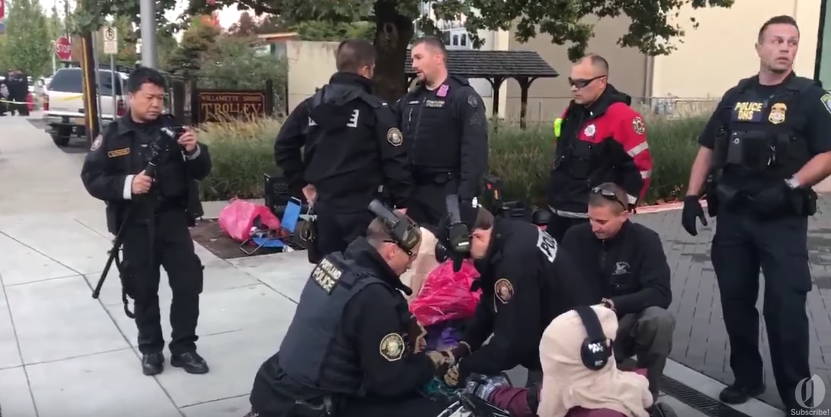 Twitter doesn’t seem to be too fond of the police. Or conservatives defending them.

A former Portland mayoral candidate, Sarah Iannarone, tweeted her condemnation of the police after an incident where a man was shot and killed by the police. When conservative radio host Lars Larson, based in Portland, responded in defense of the police, he was suspended from Twitter for 12 hours for “hate speech.”

Twitter informed Larson that he had violated its terms of service, by “promoting violence against, threatening, or harassing other people on the basis of race, ethnicity, national origin, sexual orientation, gender, gender identity, religious affiliation, age, disability, or serious disease.” Even though his comments did no such thing.

Iannarone tweeted a recount of the story, saying, “The headline kinda says it all, doesn't it? We know the police kill. Question is whether we will ever stop funding this deadly paramilitary force and start funding things that actually keep the people of Portland safe.” (Just out of curiosity, what does she think will keep Portland safe? Antifa?)

Larson responded, “Gee @sarahforpdx you think the cops make PDX dangerous? Read the story and you find the dead man was 1) paranoid schizophrenic 2) invaded a stranger's home 3) fought with the officer 4) pulled a knife. What's your millennial snowflake solution to that situation without the cops?”

Iannarone even uses the word ‘snowflake’ in her Twitter username, M. Snowflake Iannarone. The issue clearly wasn’t Larson’s tone here. He was allowed back on after 12 hours. He then tweeted, “Just back from my 12 hr twitter ban. just so u know @Twitter suspended me for replying to an activist @sarahforpdx who lashed out @PPBPIO for shooting a man. I merely pointed out politely that the man invaded a stranger's home, fought a cop, pulled a knife and posed a threat.”

Iannarone had reported the first tweet, saying, “Whenever that account retweets me, it brings commenters into my sphere who hurl insult and innuendo my direction. I reported three other accounts resulting from the retweet that day that Twitter admins agreed were abusive or harmful.”

She then said, “Right-wing Twitter is a platform predicated on inaccurate, misleading, and hateful speech, right up to the highest levels of government with our Tweeter-in-chief."

Twitter seems to be interested in cracking down more on conservatives. In the past week, two other accounts were suspended for “hate speech.” One of them was suspended for referring to Chelsea/Bradley Manning as a “guy,” while the other was nuked for promoting the border wall.