Even congressmen can’t get calls for assassination deleted from Facebook — unless they bring them up at a congressional hearing.

During the House Judiciary Committee hearing on “Examining the Content Filtering Practices of Social Media Giants,” on July 17, 2018,  Rep. Matt Gaetz, R.-Fl., gave an example of extremist left-wing violent content that was never censored by Facebook. Gaetz asked Facebook representative Monika Bickert why Milkshakes Against the Republican Party, the page that posted violent suggestions against the GOP, why it was never removed.

One of that operation’s post openly called for violence: “You remember the shooting at the Republican baseball game? One of those should happen every week until those NRA-funded sons of bitches do something about this.”

Another post read, “Dear crazed shooters, the GOP has frequent baseball practice. You really want to be remembered, that’s how you do it, signed Americans Tired of Our Politicians Bathing in the Blood of the Innocent for a Few Million Dollars from the Terrorist Organization NRA.”

After Gaetz asked Bickert to read these posts out loud in the hearing, he asked, “Why is Milkshakes Against the Republican Party still a live page on your platform?” 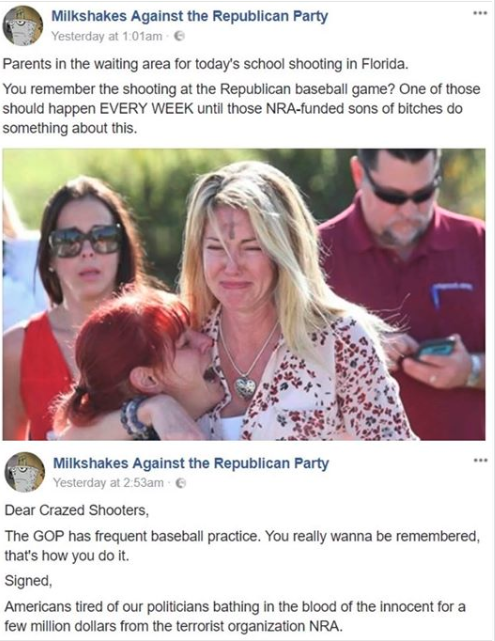 Bickert tried to dodge the question with her response: “I can’t speak … I haven’t reviewed this page, so I can’t speak to why any page is up or not, but we can certainly follow up with it.”

Gaetz then said that a member of his staff reported the page and the posts to Facebook, and the response from the company was, “It doesn’t go against one of our specific community standards.”

Gaetz posed the question to Bickert: “Do you see the tension between your public testimony today, your terms of service, and then your conduct when you’re presented with violent calls to shoot people who are members of my party at baseball practice?”

Bickert later stated that different standards were applied to different pages based on the amount and severity of violations of community standards. She argued that while a post about sexual assault would result in an immediate user ban, calls for violence were apparently treated as more gray than black and white.