Maria Ressa is a Nobel Peace prize winner, an author–and a supporter of increased restrictions of online free speech. 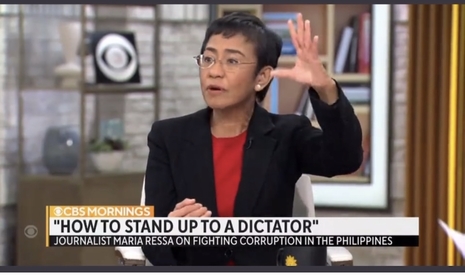 Nobel Peace Prize winner and author Maria Ressa came on CBS Mornings Nov. 28 to discuss her new book, How to Stand Up to a Dictator. Ressa received the prize for supposedly helping to “safeguard freedom of expression,” but the Philippina dissident seemingly forgot that suppression of free speech is part of the dictatorship she supposedly fights.

CBS Mornings gushed in a tweet, “Nobel Peace Prize winner @mariaressa, who faces decades in prison in the Philippines, says we are living in the age of ‘exponential lies,’ as fast-moving disinformation online weakens democracy globally.” CBS Mornings co-host Gayle King explained that Ressa’s new book is specifically about fighting a dictator–and online disinformation. Ressa then detailed her pro-censorship philosophy.

“Without facts you can’t have truth, without truth you can’t have trust,” Ressa pontificated. She said she was the “truest of true believers” when Facebook first started. But now, Ressa said, Facebook spreads lies “by design.” She noted that 100 percent of Philippinos on the internet are on Facebook, and are “guinea pigs” for manipulation.

CBS Mornings co-host Tony Dokoupil mentioned that many say more free speech is the solution to bad speech. Ressa said that statement was made before the internet, before “the age of exponential lies” and social media. She used the analogy of having an angel and a devil on one’s shoulder advising a person what choices to make, and claimed that social media “gagged the angel” telling people to do the right thing and put the “devil … directly in your nervous system.”

Ressa said social media changes behavior and manipulates emotions. Her example of social media causing violence was, of course, the extremely-overused events of Jan. 6, 2021, where the only people who died were two protestors killed by law enforcement. “If you don’t have integrity of facts, you do not have integrity of elections,” Ressa scaremongered, without providing proof. Facebook, Twitter and TikTok all attempted to influence the 2022 elections.

Ressa also claimed that social media hits “both sides” of the political spectrum, even though evidence shows conservatives are far more targeted than leftists. “When you say a lie a million times, it becomes a fact,” Ressa said. Does that include the lie that censorship helps democracy? She said from 2016 on there has been a “drug addiction” of “disinformation” online, and “democracy is weaker not just here … but globally.”

“It’s not misinformation, it’s disinformation,” Ressa blathered, emphasizing the supposed deliberate nature of it. “We have to get back agency.” Except for those with whom Ressa disagrees, apparently. “Why is there not a Better Business Bureau for our minds and emotions?” she asked, comparing it to regulation of DNA-editing technology.