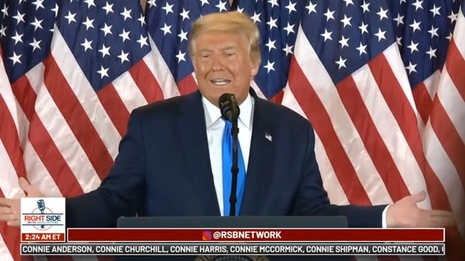 Former President Donald Trump slammed the collusion by the FBI and Facebook to censor election-related content in the lead-up to the 2020 election. Trump accused the FBI of specifically targeting the Hunter Biden laptop scandal in two Truth Social posts.

Trump’s post comes at a time that at least three major tech platforms have announced programs to censor election-related content and the week after Facebook CEO Mark Zuckerberg admitted that his company followed the FBI’s guidance and censored the Hunter Biden laptop scandal, which swayed the 2020 election.

Trump posted on Truth Social Aug. 29 that the FBI engaged in “Election Interference” and then said the FBI “told Facebook and the Media that [Hunter’s] Laptop from Hell was ‘Russian Disinformation’ (it wasn’t!).”

Big Tech censored the New York Post’s bombshell Hunter Biden laptop report two and a half weeks before the 2020 election. Trump also posted on Truth Social Aug. 31, “The fact is that the FBI told Facebook the ‘Laptop from Hell’ was Russian disinformation when they knew very well that it was not.”

Both the FBI and Facebook have implied that the federal agency did not directly demand censorship of the Hunter Biden laptop story. Zuckerberg stammered an evasive reply when Joe Rogan asked if the FBI specifically flagged that scandal specifically. The FBI said after Zuckerberg’s interview it “routinely” works with social media companies to censor online content.

Trump continued to lash into the censorship of the Hunter scandal in his post. “This Fake statement alone changed the outcome of the Election by millions of votes, and it was by no means the only corruption which took place,” he Truthed.

Trump ended: “Sadly, the Media in our Country is so afraid of being sued that they never want to mention anything having to do with the corrupt Election of 2020!”

Twitter, Facebook and TikTok recently launched projects to increase censorship of supposed election-related “misinformation” in the lead-up to the 2022 midterm elections.