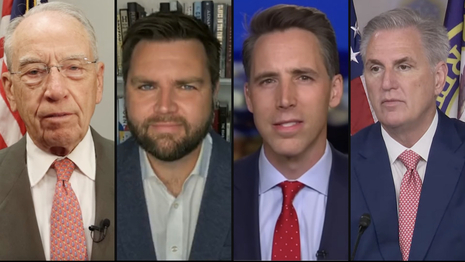 The criticism comes as Facebook, Twitter and TikTok all launched projects to deal with supposed election “misinformation.” House Minority Leader Kevin McCarthy (R-CA) already highlighted the need to target tech monopolies and Section 230 reform if the Republicans take back Congress after the November midterm elections.

Republican senate candidate and author J.D. Vance said Big Tech is “too powerful” and that conservatives need to “wake up” and “go after” tech companies, according to Breitbart.

“The FBI preemptively warned Facebook off Hunter Biden laptop reporting,” Hawley tweeted Thursday. “This same agency effectively laundered Russian disinfo in the 2016 election in the form of Steele dossier. And later lied to a court to get wiretaps.”

McCarthy criticized the two-headed attack on free speech. “The FBI colluded with Big Tech to silence news stories weeks before the 2020 election in an attempt to control your access to information,” McCarthy tweeted Thursday. “Democrats in Congress have been intentionally ignoring the facts. When Republicans are back in charge, we will hold all of them accountable.”

Grassley also commented on the revelations. “FBI & Facebook/Big Tech interfered in 2020 election Facebook acted as an arm of govt Both Facebook & FBI should b ashamed of interfering in our electoral process,” Grassley tweeted.

Zuckerberg told podcast host Joe Rogan last week that Facebook censored the Hunter Biden laptop scandal in 2020 after a general request from the FBI. A post-election poll from the Media Research Center shows that Big Media and Big Tech helped steal the 2020 election by censoring the scandal.

The FBI has since said that it “routinely” works with social media companies to censor “threat information.”