Two YouTubers described as 'China's first' called SnapChat out for seemingly bowing to Chinese propaganda on Taiwan in a recent podcast.

Matt Tye and Winston Sterzel, "were the first YouTubers in China," according to their podcast description on Apple Podcasts. They were also longtime residents of China. But they left China after the Chinese Communist Party (CCP) targeted them, and now host The China Show podcast (formerly ADV Podcasts). 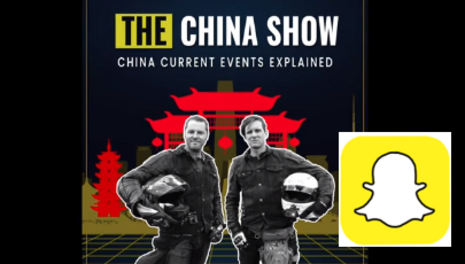 This week, Sterzel and Tye called out SnapChat for what they said was an instance of kowtowing to Chinese propaganda.

Tye and Sterzel explained that the “nine-dash line” is superimposed by China over a section of sea and territory that they claim is theirs, including Taiwan. The CCP began claiming a couple years ago that it found this border line on an ancient map and that it gives them absolute right to claim the area as their own, the hosts added.

“China has a hissy fit if you don’t have this absolutely ridiculous nine-dash line on [maps],” Tye said.

Tye then discussed a SnapChat image he said was sent to him by a friend living in Taiwan, a “friend spread” map on which SnapChat users identify their friends’ locations. The map had the same arbitrary border outline, he said.

Tye explained how offensive the line is not only to Taiwanese but to other Asian people, like Filipinos, who have been unfairly subject to China’s unjust territorial claims.

“Who are you trying to capitulate to?” Tye said of SnapChat, noting that the app is not allowed in China, while it is legal in Taiwan. “That’s absolutely immoral, SnapChat,” Sterzel said.

Tye said that, on his American version of the SnapChat map, the nine-dash line did not appear.

“We’re in a situation where they’re trying to hide it from you in other countries that they’re using this nine-dash line,” which sends the message to the Taiwanese people that “Communist China owns you, a democratic free nation,” Tye said.

Sterzel wondered if the same line is included in SnapChat’s versions for the Philippines and other countries targeted by China, promising follow-up research. “Taiwan is separate,” he clarified, adding that Taiwan has never been ruled by the CCP.

As Sterzel said, if SnapChat really is using a Chinese propaganda map in Taiwan and not elsewhere, “SnapChat has to change.”

Conservatives are under attack. Contact SnapChat here and demand Big Tech be held to account to mirror the First Amendment. If you have been censored, contact us at the Media Research Center contact form, and help us hold Big Tech accountable.