Three congressional lawmakers sent letters to NewsGuard and the American Federation of Teachers union. The letters cited original MRC Free Speech America research to illustrate NewsGuard’s leftist bias and the dangers of its new partnership with the leftist teachers' union. 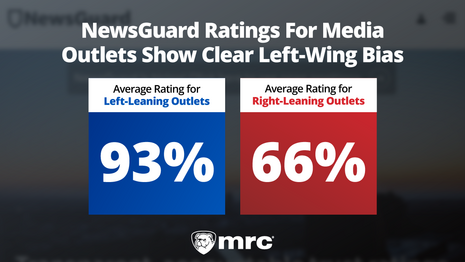 The lawmakers cited the finding that left-leaning outlets promoting progressive views, such as Jacobin and Occupy Democrats, received high ratings. “These are hardly unbiased entities, and any rating system that ranks them as such deserves our scrutiny,” the congressional lawmakers wrote.

The letters requested information on a number of points from NewsGuard and AFT, including documentation of the events that led to the partnership, whether parents were consulted on the partnership and NewsGuard’s criteria for determining information’s veracity.

The letters expressed “concern” over the groups’ “‘anti-misinformation’ partnership.”  The letters then cited MRC Free Speech America original research to illustrate NewsGuard’s bias and make the case for why the platform shouldn’t be trusted as an unbiased referee for news content that K-12 students consume.

The lawmakers said AFT apparently prefers American schoolchildren to read Chinese propaganda rather than right-leaning American content, calling the apparent priority for communism “absurd and unjust.” The letters noted: “These factors taken together demonstrate that NewsGuard is not qualified to determine the veracity of any news, let alone determine the truth for millions of American school children.”

The lawmakers added that AFT also took biased actions in the past. AFT “fought feverishly against in-person instruction” since the start of the COVID-19 pandemic, despite the documented harms of remote learning. The lawmakers said in the letters that AFT donated “overwhelmingly” to Democratic Party candidates and that Weingarten had appeared with Terry McAuliffe, the Democratic candidate for Virginia governor, during the 2021 election.

The letters ended with a list of questions seeking transparency around the AFT-NewsGuard partnership and the two organizations’ business practices.