Media in China is almost entirely under the control of the ruling Chinese Communist Party, meaning that they are little more than propaganda arms for a tyrannical government. This is so blatant that former President Donald Trump’s then-Secretary of State Mike Pompeo in 2020 designated nine Chinese media outlets operating in the U.S. as “foreign missions.” China Global Television Network (CGTN) and Global Times were among the nine outlets so designated.

Some of the genocidal CCP’s state media sites receive extremely low ratings, but other CCP-controlled state media outlets received higher NewsGuard ratings than several U.S. outlets. For example, China's Global Times, which has tweeted out violent rhetoric, was rated 39.5/100 by NewsGuard, while One America News Network (OANN) is rated 17.5/100. Not only that, but NewsGuard states of several CCP state-media outlets that they do “not repeatedly publish false content.” In contrast, Newsmax, OANN and LifeNews are all rated as “repeatedly publish[ing] false content.” 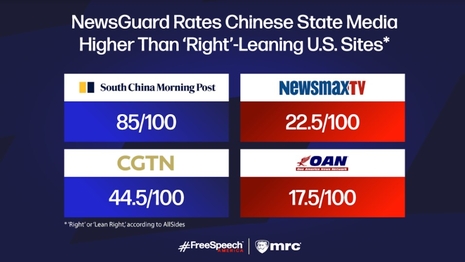 MRC Free Speech America recently reported on how sites rated by AllSides as “lean right” or “right” like Newsmax and OANN and pro-life outlet LifeNews received very bad ratings from NewsGuard, while left-leaning sites like The New York Times and publicly-funded NPR received good ratings. The MRC Free Speech America study demonstrated NewsGuard’s left-leaning bias. There was a 27 point disparity between the average rating for “left” and “lean left” outlets and the average rating for “right” and “lean right” outlets.

NewsGuard’s ratings of outlets that AllSides rates “right” or “lean right” and at least one pro-life outlet versus some Chinese state-run media sites would seem to ignore the utter lack of journalistic credibility of the latter. NewsGuard rates Newsmax 22.5/100 for credibility. LifeNews was rated 30/100 for credibility, with NewsGuard asserting the pro-life site published “false health claims about abortion safety.” And again, OANN is rated 17.5/100.

China Global Television Network (CGTN) is a CCP state-run media outlet. CGTN received a rating of 44.5/100 from NewsGuard—still below a rating with a green check mark of credibility, but significantly higher than the rating for either Newsmax, LifeNews or OANN.

Global Times, which has gone so far as to threaten Australia with becoming “cannon fodder” on Twitter, has a NewsGuard rating of 39.5/100. Again, while this is not a good score, NewsGuard still rates Global Times higher than Newsmax, LifeNews or OANN.

South China Morning Post (SCMP) is owned by Alibaba, a company founded by Jack Ma and largely owned and controlled by the CCP, according to The National Pulse and Forbes. The Atlantic wrote that SCMP senior editors are now apparently too often “overly deferential to [Chinese] authorities.” The New York Times called SCMP, “A Hong Kong Newspaper on a Mission to Promote China’s Soft Power.” NewsGuard rates SCMP a high score of 85/100, even while admitting simultaneously that SCMP is “owned by the Chinese conglomerate Alibaba.” SCMP ran an article when Ma acquired the outlet trying to allay concerns. CNBC, however, reported back in 2018 that Ma has been a member of the Chinese Communist Party since the 1980s. As an example of biased journalism, a SCMP columnist wrote a Jan. 13 article defending China’s dishonest reporting on COVID-19 throughout the pandemic. Two other recent articles from SCMP favor or promote the CCP’s weak defense of the nation’s genocidal policies against Uyghurs.