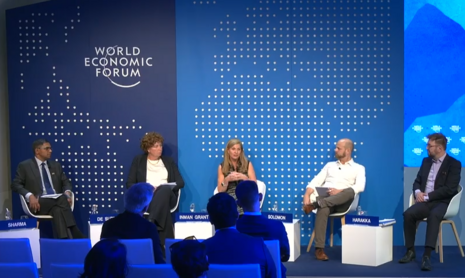 Under the guise of defending her work as “eSafety commissioner,” Inman Grant made a stunning statement: “I think we’re going to have to think about a recalibration of a whole range of human rights that are playing out online, you know, from freedom of speech to the freedom to–you know–to be free from on, online violence.”

But Inman Grant was not the only panelist who made concerning statements about controlling what takes place on the internet.

Sharma made it clear just how invasive he thinks governments should be. “There is personal data, and there is the data of us as citizens. And I think the government and the country has the right on our data as citizens. For example, if you want to collect all data on medical history to be able to analyze what is going wrong with a certain disease, you need to have that access,” he said. “The concept of data ownership is going to evolve much faster than we realize.”

Despite urging a more cautious approach, Solomon agreed with taking down "violent" content without specifying exactly what that meant.

The panel continually called for fighting alleged “misinformation,” including “health misinformation.” Sharma claimed that “misinformation” is “organized.” He specifically cited Brexit and the “U.S. presidential elections” as examples, saying the alleged misinformation is “by design,” which must be proportionately countered “by design and much force.”

Inman Grant has multiple Big Tech ties, having worked for Microsoft, Twitter and Adobe. She said during the WEF panel the work of her eSafety office involves a “complex dance of cooperation and compliance.” Inman Grant brought up Tesla CEO Elon Musk’s ongoing effort to make Twitter into a pro-free speech platform. She claimed that “marginalized” groups, including “intersectional factors,” were being silenced online, and said that freedom of speech cannot be a “free-for-all.”

WEF has headed totalitarian initiatives, including “The Great Reset.” WEF also published a blog marketing the underlying concepts of The Great Reset in 2016 headlined “Welcome To 2030: I Own Nothing, Have No Privacy And Life Has Never Been Better.”