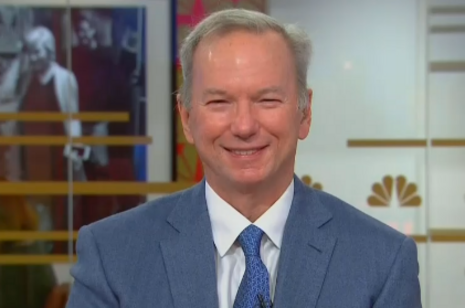 Politico reported that former Google CEO and leftist billionaire Schmidt even apparently paid the salaries of government officials, among other actions. President Joe Biden was giving “unprecedented access and power” to the White House Office of Science and Technology Policy (OSTP), and Schmidt was heavily involved there through his foundation Schmidt Futures, according to Politico.

OSTP sets priorities for the $1.4 trillion health and science annual federal spending, and it has also been increasingly focused on artificial intelligence, according to Politico.

Over a dozen of the 140-member office staff were reportedly associates of Schmidt in some way, and some were even current employees of Schmidt, Politico reported. Two science office employees received salaries indirectly from “charity arm” Schmidt Futures, including, for some weeks, senior official at OSTP and current chief of staff Marc Aidinoff, Politico wrote.

The other science office employee who received monetary aid from Schmidt was reportedly an unpaid consultant and Schmidt employee who had to leave the science office position after “ethics complaints.” Schmidt Futures fellowships were another monetary benefit offered OSTP employees, according to Politico.

The former Google CEO has been involved with government for years, too. Schmidt, who worked for the Obama Defense Department, recently called for tech companies to get more involved in national security, a suggestion that Rep. Greg Steube (R-FL) exclusively told MRC Free Speech America would be “incredibly dangerous.”

Schmidt is on the boards of multiple tech companies, including those with an artificial intelligence (AI) or 5G focus. The ex-Google CEO chaired the National Security Commission on Artificial Intelligence, founded in 2018, Politico reported. He has reportedly advocated for more federal involvement with AI and 5G.

Schmidt reportedly poured millions into defense startup Rebellion Defense, which has ties to the Biden administration through Biden’s transition team, according to Breitbart. Schmidt is reportedly a strategic advisor for blockchain project Chainlink Labs. Politico wrote that Schmidt helped launch and continues on the board of Civis Analytics, which helps Democrat campaigns, including Biden’s 2020 campaign.

“OSTP ethics officials were alarmed” with Schmidt Futures involvement in the “hiring and use” of both fellows and consultants, Politico wrote.

Conservatives are under attack. Contact your representatives and demand they hold Big Tech to account to provide transparency, provide clarity on hate speech and an equal footing for conservatives. If you have been censored, contact us using CensorTrack’s contact form, and help us hold Big Tech accountable.