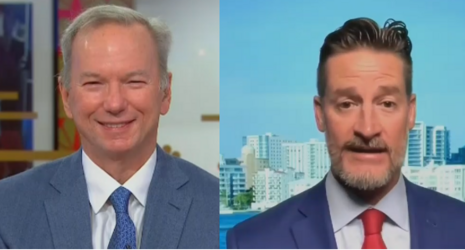 Schmidt has reportedly been tied to the defense industry for years, including through Obama’s Defense Department, and he supported Hillary Clinton’s failed 2016 presidential bid, according to Breitbart.

Schmidt told CNBC that the Russia-Ukraine war “is going to help solidify the tech companies’ understanding of why national security is important,” Breitbart reported. “The tech industry needs to support it.”

Steube, who sits on the House Judiciary Committee, slammed Schmidt’s suggestion in exclusive comments to MRC Free Speech America. “It would be incredibly dangerous to give Big Tech one more inch of power, especially when it comes to shaping the narrative of the security of the United States,” Steube said. “I’m working in Congress to rein in Big Tech’s power – we certainly shouldn’t expand it.”

Steube was one of the Republicans who reintroduced the Protect Speech Act in 2021 to modify Section 230 protections.

The former CEO of Google has long had ties to the defense industry, according to Breitbart. For instance, Breitbart reported that Schmidt chaired the Obama Defense Department’s “Defense Innovation Board” (DIB), created in 2016. Schmidt has since contributed to a $63 million grant to defense startup Rebellion Defense, according to The American Prospect. The startup reportedly has ties to the Biden administration.

Schmidt insisted in his CNBC interview that the current Ukraine conflict is evidence that the tech industry must get involved with national security. “If you believed, falsely, that 10 years ago, that war had been eliminated, that conflict was eliminated, we didn’t need militaries and so forth to protect us, then you would say, ‘Let’s not work with the government, let’s not focus on this stuff,’” Schmidt reportedly told CNBC. “And I think we’ve unfortunately and horrifically put that argument to bed. We need a strong national security in our country, and the tech industry needs to support it.”

Yet Schmidt seems to argue for making private companies into formal government operatives and even players in actual foreign wars. This is the danger of social media companies’ recent moves to censor Russian state media, among other actions, since the Russian military’s invasion of Ukraine started last month.

Conservatives are under attack. Contact your representatives and demand they hold Big Tech to account to mirror the First Amendment, provide clarity on hate speech and an equal footing for conservatives. If you have been censored, contact us using CensorTrack’s contact form, and help us hold Big Tech accountable.