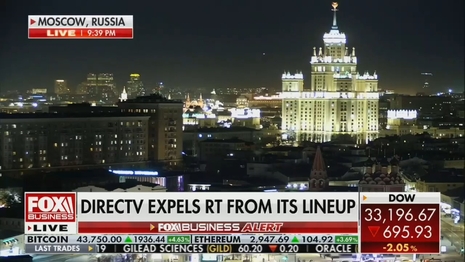 DirecTV, America’s largest satellite provider, dropped programming from Russia state-affiliated RT America as pressure mounts on companies to react to Russia’s invasion of Ukraine. RT is Russian state-run propaganda with a massive social media presence, including a verified YouTube channel that was the “most watched news network on YouTube” with over 10 billion views, according to RT.

While DirecTV only just dropped RT America, the satellite provider already refused to renew its contract with One America News Network (OAN), which will expire this year, Newsmax reported in January. Did DirecTV consider OAN more untrustworthy and controversial than Russian state propaganda?

“In line with our previous agreement with RT America, we are accelerating this year’s contract expiration timeline and will no longer offer their programming effective immediately,” a DirecTV spokesman reportedly told Reuters. AT&T owns about 70 percent of DirecTV, Reuters wrote. The DirecTV spokesman claimed that DirecTV had already been reviewing programmers with upcoming expiring contracts and had been “re-assessing the value RT America brings to its broader customer base,” Reuters summarized. The spokesman reportedly asserted that dropping RT America was a necessary response to Russia’s attacks on Ukraine.

The question the network didn’t answer is, why would DirecTV wait to drop RT America’s programming until days after Russia’s invasion of Ukraine, while the satellite provider had already dropped OAN?

NewsBusters detected RT in at least five lies or propaganda spins in the Russian outlet’s reporting on the invasion of Ukraine.

Multiple social media companies as of Tuesday morning have reportedly announced various actions against Russia state-affiliated accounts and material. YouTube will block channels that are linked to Sputnik and RT across Europe, Reuters reported, and Twitter will label content with Russian state media links, per Axios. Microsoft, TikTok and Facebook “are cracking down” on certain Russian state media in Europe, National Public Radio reported. Also, streaming service Roku Inc. will drop RT from its Roku Channel Store in Europe, according to Reuters. Apple will remove the RT and Sputnik apps from its App Store outside Russia, among other actions, according to BuzzFeed’s tech and business editor John Paczkowski.

Conservatives are under attack. Contact your representatives and demand they hold Big Tech to account to provide clarity on hate speech and an equal footing for conservatives. If you have been censored, contact us using CensorTrack’s contact form, and help us hold Big Tech accountable.