Facebook has reportedly exacerbated the southern U.S. border crisis by allowing illegal immigrants and even human smugglers to facilitate their activities on the company’s platforms. Meanwhile, posts combatting human trafficking were reportedly censored.

The company reportedly made the admission that human smugglers and illegal migrants coordinate activities on Facebook’s several platforms in a private letter to Arizona Attorney General Mark Brnovich.  Brnovich was “surprised” by the revelation and wrote a letter last week to the U.S. Department of Justice. He asked U.S. Attorney General Merrick Garland in the letter to investigate the social media giant and find a way to “stop its active encouragement and facilitation of illegal entry.” Facebook reportedly censored Brnovich’s anti-human trafficking posts. 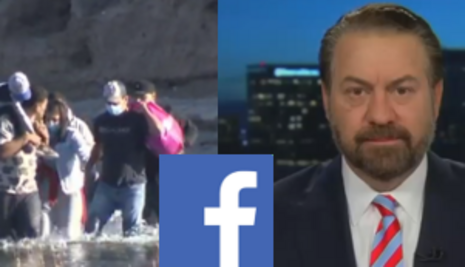 Facebook does not seemingly make policy exceptions for other illegal activity aside from migration, even when the latter may assist abuse victims, according to The Washington Times.

The Times described Facebook-owned WhatsApp as the app most mentioned by smugglers. The Times said it found evidence that cartel smugglers use WhatsApp to extort money from the families of smuggled migrants.

A Facebook spokesperson told MRC Free Speech America, “We prohibit content that offers or assists with human smuggling, invest in technology and people to proactively identify it, and remove it from our platform whenever we find it.”

Facebook’s letter said the platform permits “people to share information about how to enter a country illegally or request information about how to be smuggled,” per Brnovich’s website. “This is another example of how out of touch Big Tech is with America. The cartels are seizing control of our southern border, and shame on anyone who is exploiting this crisis to enrich themselves,” Brnovich stated.

Facebook’s Castleberry reportedly said that asylum seekers under international law may attempt illegal entry, but using Facebook may prevent them from seeking the aid of human traffickers. Brnovich said that he and his office are investigating instances of sex trafficking on Facebook.

Center for Immigration Studies national security fellow Todd Bensman agreed that social media worsens the border crisis, according to The Times. Bensman said every immigrant he met had a phone “fully plugged into the social media world, and that gave that live-time intelligence information about where to go, when to go and how people upstream were doing.”