The book in question, BLM: The Making of a New Marxist Revolution, was written by Mike Gonzalez, senior fellow at The Heritage Foundation. Heritage tried to purchase an ad for Gonzalez’s book, but reported that “Amazon, the nation’s largest retailer, blocked it from its website,” according to Heritage’s The Daily Signal. 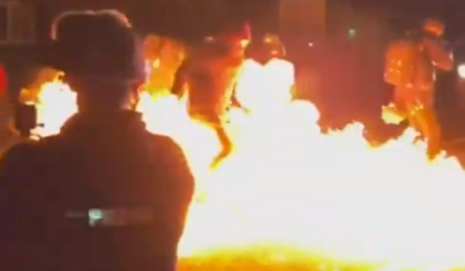 The Daily Signal said Amazon notified Heritage Tuesday that the advertisement for Gonzalez’s book “no longer complies with our current Creative Acceptance Policies.”

Amazon continued, “Specifically for the following reasons: Your ad contains book/s or content that is not allowed. Content that revolves around controversial or highly debated social topics is not permitted.” Amazon also told Heritage, “Please remove this content from your ad.” The book was still being sold on Amazon as a category best-seller.

Amazon told MRC Free Speech America, “Our policies were not enforced correctly in this case. We fixed the error, communicated with the advertiser, and the book is now being advertised. We will be providing additional training to ensure our teams are clear on our policies and how to enforce them in the future.”

Mike Gonzalez said in a statement he wrote the book because the “press refused to cover the important questions” about Black Lives Matter. He suggested Amazon was “trying to limit how many Americans read this book.” The Daily Signal quoted Gonzalez:

“The American people deserve answers to those questions, especially after the 630 or more riots that left our cities burning, businesses destroyed and billions in damage, and Americans dead.”

Other books that discuss “controversial or highly debated social topics,” however, are still permitted on the platform. Both Karl Marx’s The Communist Manifesto and Adolf Hitler’s Mein Kampf are available for sale on Amazon. Stamped: Racism, Antiracism, and You, Jason Reynolds’ remix for youth of Ibram X. Kendi’s Stamped from the Beginning, is sold on Amazon as an “Editors’ pick” for the “Best Young Adult” category. Stamped praises Communist activists.

Other “controversial” products sold on Amazon include: an “Amazon’s Choice” T-shirt that reads, “My Body My Choice,” atheist T-shirts attempting to mock Christianity and coins and stamps featuring swastikas and Hitler. A “Genuine Nazi Swastika Reichspfennig coin with Hitler Stamp” is described as “a great GIFT for the World War Two collector!” Amazon also previously sold a “Kill All Republicans” T-shirt as a sponsored product among 204 items promoting violence and hate on its site.

Conservatives are under attack. Contact Amazon at (206) 266-1000 and demand that it be held to account to mirror the First Amendment while providing transparency, clarity on “hate speech” and equal footing for conservatives. If you have been censored, contact us using CensorTrack’s contact form, and help us hold Big Tech accountable.