Conservative commentator Steven Crowder has been suspended from YouTube again. 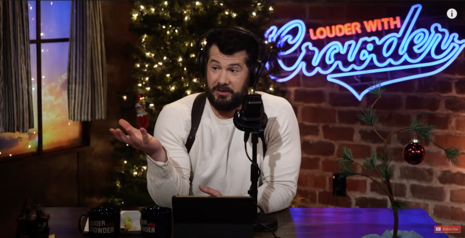 If a user receives three strikes within a 90 day period, the user will be permanently banned. Strikes expire after 90 days, but Crowder is one strike away from being permanently suspended from the platform. He went on to stream his show on Rumble, a video streaming alternative.

"Last night YouTube sent us the second channel strike," Crowder said on his show on Blaze Media. "So this is going to prevent us from streaming on YouTube for the rest of the year."

"As usual, they did not provide any details for the suspension," he added. "It's one of those things where we could say, we could guess…I mean, take your pick."

The show featured a parody song about a transgender individual in a romantic relationship and also discussed criticism author JK Rowling had received over her own comments on the issue.

YouTube said Crowder violated the platform’s policy against “hate speech,” but did not provide a specific example.

"We have issued a second strike to the StevenCrowder channel for violating our hate speech policy, through repeated targeting of the LGBTQ+ community," YouTube spokesperson Jack Malon said. "Hate speech is not allowed on YouTube, and we remove content or issue other penalties–such as a strike–when a creator repeatedly targets, insults, and abuses a protected group based on certain attributes, such as sexual orientation or gender identity and expression, across multiple uploads."

If Crowder receives one more strike within the 90-day timeframe of his first strike, his channel will be permanently suspended. He has over five million subscribers.