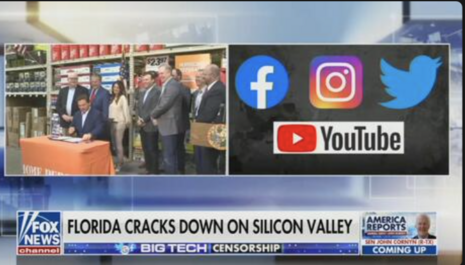 NetChoice, an internet trade group that “works to make the internet safe for free enterprise and free expression,” claims that the law opens the door for “state-run media.” NetChoice association members include Amazon, Google, and Paypal.

“We cannot stand idly by as Florida's lawmakers push unconstitutional bills into law that bring us closer to state-run media and a state-run internet," NetChoice's Vice President Carl Szabo said. "The First Amendment protects social media platforms' right to host and moderate content as they see fit for their business models and users."

Politico called NetChoice “tech's most aggressive lobbying presence in Washington D.C.,” according to the group’s website.

Gov. DeSantis signed the new law on May 24 and immediately drew criticism from leftists in the media and politics.

“This session, we took action to ensure that ‘We the People’ — real Floridians across the Sunshine State — are guaranteed protection against the Silicon Valley elites,” DeSantis said of the law. “Many in our state have experienced censorship and other tyrannical behavior firsthand in Cuba and Venezuela. If Big Tech censors enforce rules inconsistently, to discriminate in favor of the dominant Silicon Valley ideology, they will now be held accountable.”

CNN Business lamented that “Questions about the bill's constitutionality are rooted in First Amendment cases prohibiting the government from compelling speech by private entities.”

Likewise, Sen. Ron Wyden (D-OR) called the law “an invitation for extremists, racists and liars to register as political candidates just to keep their posts online.”

Meanwhile, the DeSantis administration said it anticipated legal challenges and remained confident the legislation had a "strong legal basis."

"Big Tech is in some ways more powerful than government, and certainly less accountable. Free speech is a sacred right for all Americans," Christina Pushaw, a spokeswoman for DeSantis, said.

DeSantis’ administration has also been censored by Big Tech. In March, YouTube removed a roundtable discussion on COVID that featured several anti-lockdown physicians.

“YouTube’s action is another blatant example of Big Tech attempting to silence those who disagree with their woke corporate agenda,” DeSantis said. “Good public health policy should include a variety of scientific and technical expertise, and YouTube’s decision to remove this video suppresses productive dialogue of these complex issues.”

The Sunshine State’s law is the first to regulate Big Tech’s moderation of online speech and made it easier for Florida's attorney general to sue tech companies like Facebook and Twitter that impose content moderation standards inconsistently.