Christchurch Pact Will Use Algorithms to ‘Restrict Borderline Content’

The summit dedicated to the controversial Christchurch Agreement announced that participating governments will use algorithms to monitor “extreme” speech. 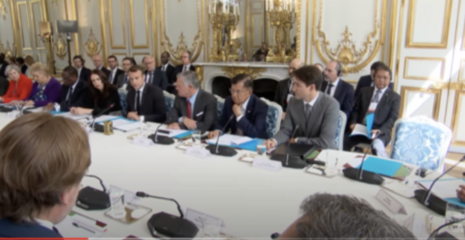 The agreement is named after the New Zealand city where a far-right gunman murdered 51 people in a mosque in 2019. The perpetrator live-streaming the massacre on Facebook.

"[Algorithims are] probably the biggest focus for the Call community over the next year," New Zealand Prime Minister Jacinda Ardern said. She was referencing YouTube’s use of algorithms to link users to other videos they might be interested in.

"Let's have that conversation around the ethical use of algorithms, and how they can be used in a positive way and for positive interventions.”

"When we look at the environment in which the terrorist for March 15 was radicalized, even in that period in those two years there has been significant change by many of the platforms. Algorithms are where many of us are looking to," she concluded.

YouTube has vowed to “restrict borderline content,” in response. Microsoft president Brad Smith said in his opening statement that the company wanted to ensure the Internet was a “force for good.”

In the United States, President Joe Biden signaled his intent to sign onto the agreement and participate in the summit earlier this month. In addition to its support from world leaders, the agreement is also supported by Facebook, Twitter, Amazon, and YouTube. Ten “online service providers” have signed it in total.

White House press secretary Jen Psaki said at the time that the United States would “join the Christchurch Call to Action to Eliminate Terrorist and Violent Extremist Content Online, a global pledge by member governments and technology partners to work together to address terrorist and violent extremist content online."

The State Department also released a statement, adding that the opportunity to sign the agreement and join other world nations was “welcome.”

“We welcome the important momentum that the Christchurch Call has generated and look forward to continuing our work with government, technology sector partners, civil society, and other stakeholders to prevent terrorists and violent extremists from exploiting the Internet while protecting its openness, interoperability, reliability, and security.”

The Biden administration signaled its intent to join the agreement shortly after it announced that it would seek “outside firms” to monitor online extremism.

For his part, President Donald Trump refused to support it, citing concerns that the agreement would inhibit free speech.

”We continue to be proactive in our efforts to counter terrorist content online while also continuing to respect freedom of expression and freedom of the press,” the Trump administration said at the time.

“Further, we maintain that the best tool to defeat terrorist speech is productive speech, and thus we emphasize the importance of promoting credible, alternative narratives as the primary means by which we can defeat terrorist messaging.”

If you have been censored, contact us at the Media Research Center contact form, and help us hold Big Tech accountable.